Portrait of Sarah Bernhardt as Hermione 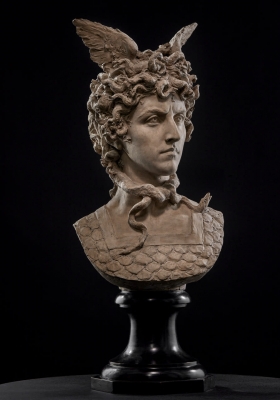 Private collection, South of France, until 2019.

The moment immortalised by the sculpture corresponds to the denouement of Racine's play. Hermione, in love with Pyrrhus, cannot consent to Pyrrhus' marriage to her rival Andromache. She orders Orestes, who is secretly in love with Hermione, to sacrifice Pyrrhus and promises to marry him at this price. Orestes accepts and murders Pyrrhus; but when Hermione learns of the execution of the crime, she repels the murderer with horror, curses him and runs to kill herself over Pyrhus' corpse. Overcome by madness, Orestes then sees visions of Hermione accompanied by the Erinyes, the vengeful female deities of the underworld. Charged with punishing criminals, these mythological creatures torment the guilty with remorse to the point of madness.

The intensity of the gaze, the exaggerated frown of the eyebrows - whose spiral movement frames the face and recalls the undulation of the snakes - the hardness of the thin lips, evoke Hermione's wrath. It is also an expression of severe reprobation, the very incarnation of the guilt that torments Orestes.

While Prosper d'Epinay fully illustrates the strength of expression of the face, the viewer's attention is obviously captured by the imposing snake hair that overhangs the bust. The sculptor interprets the famous alliteration of Racine's play: "Who are those snakes for, hissing in your hair?”.[i] This startling vision of the Erynia was inspired to the French tragedian by Euripides' Orestes. As for the precise image of the head wreathed by snakes, an attribute of the vengeful goddesses, inspiration for the motif would have lain in Ovid's Metamorphoses or Seneca's Medea.