Portrait of a Young Girl, possibly the Artist's Daughter Louise 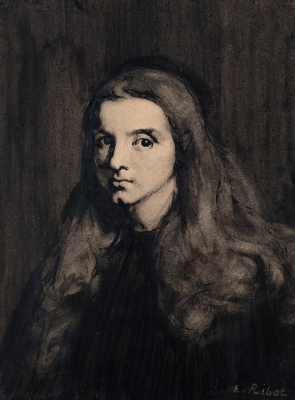 Truly individual in both style and technique, this portrait in ink and wash is one of the finest works on paper by Théodule Ribot to have been on the market in many years. The French realist artist can certainly be considered one of the most talented draughtmen of the 19th century, his varied graphic works demonstrating both his skill and originality. Greatly admired by contemporaries such as Claude Monet and Auguste Rodin, who designated him an ‘artiste indépendant’ due to his individuality and position outside of the mainstream, Ribot fell into obscurity during the 20th century, his artistic singularity making it difficult to place him inside any movement. However, Ribot is again starting to receive the attention he deserves and was recently the subject of an important travelling monographic exhibition in France.[i]

The present sheet, imbued with a quiet intimacy and directness, is quite possibly a depiction of Ribot’s daughter Louise, and indeed the artist’s family often served as models for reasons of economy. The physiognomy of the sitter, and notably the cleft chin, closely matches the artist’s well-known portrait of Louise from 1884, now in the Musée de Beaux-Arts de Reims. Also directly comparable is a beautiful pen and ink sheet dated 1872 in the Morgan Library. Again, this very likely portrays Louise, who would have been 15 in 1872, corresponding with the age of the Morgan portrait. Louise and her brother Gérmain would both go on to be artists, working in very much the same idiom as their father, who was of course their teacher.

Whether Louise or not, the present work can be placed in the early 1870s, a moment when Ribot favoured the use of ink and wash. Other than the Morgan portrait, this work can also be compared to a horizontal sheet depicting three women, also from 1872, in the Walters Art Museum. In all these sheets, Ribot’s idiosyncratic mastery and control of this most difficult of mediums is evident, resulting in singular works, ethereal in nature and endowed with a creative energy. A crucial activity for Ribot throughout his career, drawing was always undertaken as an end in itself, a way for the artist to give free reign to his spontaneity and inventiveness.

Son of a civil engineer and a pupil of Auguste-Barthélémy Glaize, Ribot dazzled his contemporaries with his artistic variety and individuality. And yet it was this originality, so different to that of his peers and hard to pin down, which hampered Ribot in his efforts to gain commercial success and official recognition. Indeed, he was rejected by the Salon jury four times before eventually being accepted in 1861, though, when finally accepted, he was praised by Théophile Gauthier no less, who eulogised Ribot’s verve and originality.[ii] Gautier also astutely cited Velasquez in connection with Ribot, who, along with other figures of the Spanish Golden Age visible in the Louvre, was undoubtedly an important source of inspiration for the French artist. The impact of these artists is reflected in Ribot’s use of chiaroscuro and his energetic technique, as well as the general sense of stillness and timelessness which pervade his diverse output, whether that be his religious compositions, portraits, still lifes, genre scenes and occasional land- and seascapes.