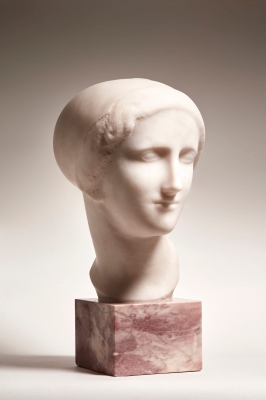 Estate of Elie Nadelman, New York;
Philip Sills, New York, since 1961 (when purchased directly from the artist’s wife, Viola Nadelman);
By whom sold, New York, Sotheby's, 2 December 1993, lot no. 134;
With Galerie Piltzer, Paris, until the Biennale des Antiquaires, 1996, when sold to:
Karl Lagerfeld, Paris, until 2021, when acquired by the present owner.

C. Nadelman, ‘A Modernist at Home: Elie Nadelman’, Over the Top, 2003, p. 85 (where described as presiding in Karl Lagerfeld’s bathroom);
J. B. Rafferty, ‘Living Lagerfeld’, Art + Auction, September 2008 (as ‘my favourite statue, Serenity, by Elie Nadelman’).

The Polish sculptor Elie Nadelman arrived in Paris from Warsaw in 1904 at the age of twenty-two; the young artist immersed himself in the study of the works of Rodin, and in the study of sculptures from Antiquity. He later moved to New York where he quickly came under the spell of the city’s dance halls, circuses, and vaudeville acts, and where his later work came to marry the influence of folk art with that of the classical form. Helena Rubinstein, the Polish-American art collector, philanthropist and cosmetics entrepreneur said of his works that ‘[…] he expressed in his art what I was trying to say in my advertising to women all over the world. To me, Nadelman’s purity of line and his feeling for form say ‘beauty’ better than all the fancy words coined for the beauty industry by Madison Avenue.’[i]

Nadelman had studied at the Academy of Fine Arts in Warsaw and travelled to Munich before settling in Paris. The works he created there, inspired by Antiquity and Hellenistic sculpture, aroused the interest of the Nathanson brothers who introduced him to André Gide and Octave Mirbeau. Eugène Druet organized in his gallery his first exhibition in Paris in 1909. It was in Paris that he met the Steins and although Gertrude herself did not usually enjoy sculpture very much, she made an exception for Nadelman whom she supported very early on.[ii] She introduced him to Picasso[iii] and he mixed with the Parisian avant-garde circles gravitating around the Steins. It seems that he was less admired by Matisse, whose resentment went so far as to put up a sign reading ‘No talking about Nadelman here’ at the entrance to his studio.[iv]