A Young Woman Consoled by her Mother, as the Man she Loves Marries Another 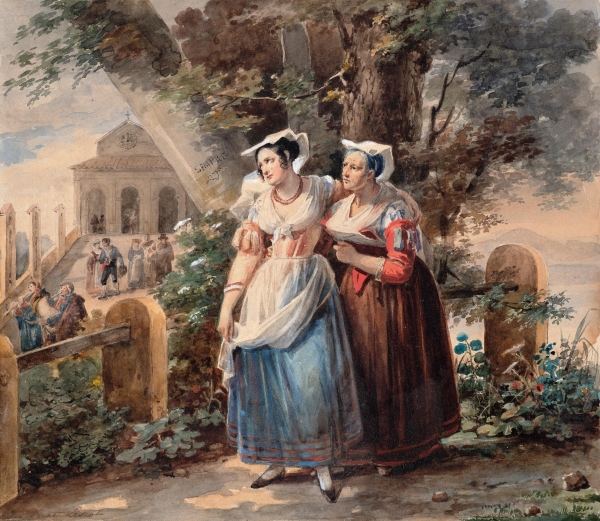 Exhibiting a total of 110 paintings across her thirty-year career, Antoinette Haudebourt-Lescot was undoubtedly amongst the most successful of early 19th-century woman painters. Demonstrating a precocious talent, Haudebourt-Lescot began studying at the age of ten with the leading neoclassical history painter, Guillaume Guillon Lethière, a friend of the family. In 1809 at the age of twenty-five, two years after Lethière was appointed to the directorship of the Académie de France in Rome, Haudebourt-Lescot broke with convention and followed her mentor to Italy.

This was an instrumental moment in her career, as Haudebourt-Lescot became the first female French artist to receive training in Italy, usually only open to the winner of the Prix de Rome, which did not allow women to compete until 1903. Whilst in Rome, the young artist met Jean-Dominique Ingres, who drew her portrait, as well as the sculptor Antonio Canova. Italian life and customs also had a tangible effect on Haudebourt-Lescot, which, with her keen eye for drama and detail, she translated to canvas and paper as genre scenes. These genre scenes, of which the present sheet is a fine example, both follow the venerated tradition of French artists in Rome of depicting Italian women in local dress and prefigure the popular Italian picturesque paintings of her French compatriot Guillaume Bodinier and the Swiss artist Leopold Robert.

Haudebourt-Lescot returned to Paris in 1816 after seven years in Rome and in 1820 she married Louis-Pierre Haudebourt, an architect she had met in Italy. As well as her regular appearances at the Salon, she received important commissions from the French government for the museum at Versailles, as well as from notable private patrons, such as the Duchess de Berry. She also taught painting to women of the Court. Haudebourt-Lescot was famous and lauded in her own lifetime, her paintings so popular that they were widely distributed as engravings. She was one of seven female artists featured in François Joseph Heim’s monumental painting depicting Charles X bestowing awards at the Salon of 1824 and in 1829 she modelled for David d’Angers, becoming a part of his pantheon of bronze portraits medallions representing the most illustrious artists and intellectuals of the age. The surprise engendered by her prodigious talents amongst her male contemporaries is best summed up by Augstin Jal in his review of the Salon of 1824: ‘Madame Haudebourt painted by herself…Truly, is this a painting by a woman? What firmness of tones and in the brush! This is a woman with real talent…!’[i]

Bursting with colour and vitality, the present work is a delightful example of Haudebourt-Lescot’s genre scenes and is related to a small painting by the artist in a private collection. Hiding out of sight behind a couple of trees, an elderly mother reassuringly wraps her arm around the waist of her tearful daughter, supporting her both emotionally and physically. The couple, in the timeworn contrast of youth with old-age, discreetly watch a joyful wedding procession exit a hilltop church in the Roman campana. The young woman’s lover, who had previously declared his undying love for her by carving an arrow-pierced heart below the word ‘Sempre’, has married another. However, the lush vegetation and blossoming flowers point renewal and regeneration – in the end, time heals all. An engraving entitled ‘L’Abandon’ after the painting was exhibited at the Salon in 1831, and therefore potentially gives an approximate date for both the painting and the watercolour, demonstrating Haudebourt-Lescot’s continued interest in Italian themes upon her return to France.