Women on the Balcony 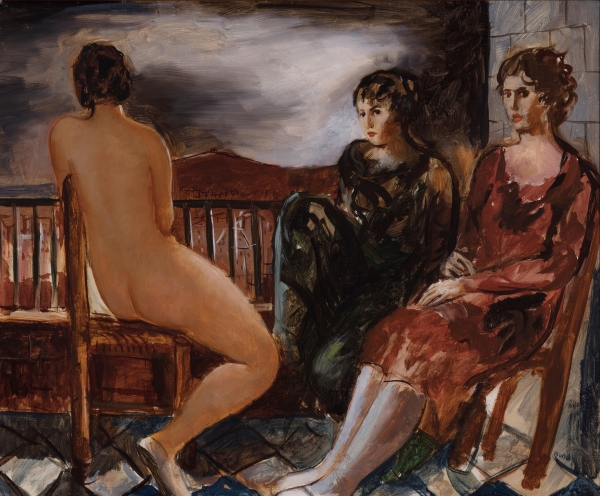 Pere Pruna i Ocerans was a very gifted painter, practically self-taught, and a notable case of artistic precocity: at the age of only 13 he took part in an exhibition at the Areñas Galleries in Barcelona, curated by the Catalan critics Jaume Brossa and Josep Maria Junoy. At the age of 17, just before doing his military service, he travelled to Paris, where he was received by Pablo Picasso, with whom he began a long friendship. The master from Malaga was impressed when he saw Pruna’s works and did not hesitate to send them to his dealers, especially André Lebel, director of the Galerie Percier.

During this early Parisian period, Pruna’s work reflects the strong influence that Picasso exerted on him both thematically and stylistically. Notable paintings from this period include Composition with Figures (1921), Woman with a Mantilla (1924) and The Harlequin (1926). The young Pruna connected straight away with the classicism that defined Picasso’s œuvre until 1924. Pruna was the perfect example of the return to classicism and realism in the 1920s and 1930s encouraged by his two great friends, Picasso and Jean Cocteau.

Pruna’s international breakthrough came when Sergei Diaghilev commissioned him to design the sets and costumes for several of his ballets, as he had previously done with Pablo Picasso and Josep Maria Sert. This collaboration had a great impact and Pruna became an artist respected and admired by collectors in Great Britain, Italy and the United States.

In the late 1920s he began to visit Barcelona more often. He consolidated his prestige among the Catalan bourgeoisie and exhibited regularly in the best art galleries in his hometown. Pruna was in Barcelona when the Civil War broke out. After a brief stay in Paris in 1937, he moved to the Francoist zone, which prevented him from returning to the French capital at the end of the war.

Pruna was a very prolific artist, who explored a wide range of techniques, including oil painting, watercolour, pastel, pen and pencil drawings, engraving and sculpture. It is impossible to understand his career without the influence of Pablo Picasso.

This particular work belongs to his Parisian period. Pruna was perfectly familiar with the female physiognomy, which he managed to sublimate throughout his career. In fact, the female figure is the main protagonist of his work, although he also portrayed male characters of the highest economic, social and cultural spheres. Elegance and sensuality are the common denominator of his portraits of women. The three women in this painting – one of whom is nude – may be assumed to be models about to be painted; while the naked woman poses gazing at the horizon, the other two wait their turn on the balcony of a Parisian flat of the period.