Verona, a view of the River Adige at San Giorgio in Braida 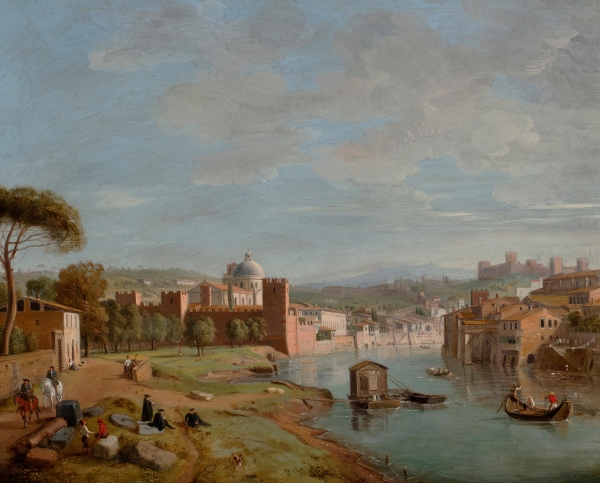 The view of Verona depicted in this work on copper is the same view as that shown in a painting on canvas, differently signed and of slightly larger dimensions (40 x 50 cm.), published by Briganti as formerly with Sestieri and then in a private collection in Rome.[i] Briganti dates that painting to the first or second decade of the 18th century and a similar date of execution seems plausible for the present copper, given that two of the four other known painted versions are dated to this period; 1705 and 1719 respectively.[ii] This appears to be the only known version on copper, a support which lends itself to Vanvitelli’s delicate brushwork and atmospheric effects.

This view is a topographically accurate representation of Verona; a historic city that suffered significant damage during the Second World War. The city is thought to have been founded circa 550 BC before being consumed into the Roman territories around 300 BC. Verona sits at the point at which three important trade routes meet, and continued to expand throughout the Medieval period. By the 16th century it had become an important military stronghold and a vital component of the Venetian Republic, remaining under the latter’s control until the end of the 18th century. Though not as vital a stop on the Italian Grand Tour as Florence or Rome, its proximity to Venice made Verona a popular destination for foreign travellers and merchants. Indeed, Vanvitelli was not the only vedutista to have immortalised the city in his paintings: Luca Carlevarijs, Antonio Joli and Bernardo Bellotto all chose to paint the city at different times. Vanvitelli must have been among the first, however, probably stopping in Verona around the same time as his Venetian sojourn, around 1694. A drawing by Vanvitelli of the river Adige, taken from the same viewpoint as this painting, confirms the artist’s presence in the city.[iii] Both the drawing and the present work, together with the four other painted versions on canvas, are an important testimony to the appearance of Verona’s city walls, prior to their destruction at the end of the 19th century. The mill on the river Adige, also visible in the drawing, is known to have existed until the early part of the last century.