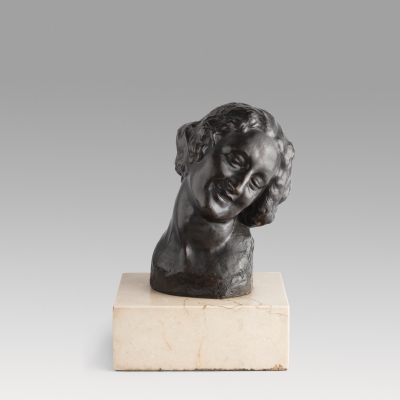 Josep Clarà was one of the most important Spanish sculptors of the first half of the 20th century. He initially trained in the traditional artistic environment of his hometown, Olot, some 90 miles north of Barcelona, but at the end of 1900 he decided to settle in Paris, where he lived until 1931. The beginning of his stay in the French capital was marked by his studies at the École des Beaux-Arts and the connections he established with renowned sculptors who undoubtedly influenced him. Among them were the famous Auguste Rodin, Antoine Bourdelle and, above all, Aristide Maillol, with whom Clarà maintained a close friendship and an obvious affinity in the conception of his work, both technically and aesthetically. With the presentation of his sculpture Ecstasy in 1903, Clarà achieved his first success in Paris and, from then on, his work began to be exhibited and bought on the international circuit.

His arrival in the city on the Seine was the key to Clarà’s ability to exploit one of his main interests and apply it to sculpture: the world of dance. This performing art served as a challenge for him to try to capture the movement, the graceful gestures of the dancers, the rhythm and, what was even more difficult, the fleeting and ephemeral instant in a traditional and static plastic language like sculpture. The fact that Paris was the world capital of art and a meeting place for intellectuals explains why it was also one of the main places for the development of modern dance as an art and expressive language. Thus, it became one of the European hotspots for the consecration or fall from grace of dancers and actresses.

Clarà established close relations with some of the most important dancers of the time, such as the American Isadora Duncan (1878 - 1927), who imposed in Paris her model based on the revival of classical Greek dance. Clarà captured the grace and elegance of Duncan’s movements, as well as the dynamism of her dance style, in numerous sculptures and in drawings and sketches. He did the same with other leading figures of the Parisian scene, with some of whom Clarà established personal relationships, beyond mutual artistic admiration. There are many examples, including Antonia Mercè La Argentina, Àurea Sarrà, Ariane Hugon, Tórtola Valencia, Josephine Baker and Isabel Rodríguez.

Isabel Rodríguez is precisely the dancer portrayed in this sculpture, which the artist entitled El somriure (‘The Smile’). It was completed in 1914 and is a highly original portrait of Rodríguez. It is one of a series of works with classical Mediterranean roots typical of the artist’s aesthetic at that time in his career: Catalan Noucentisme, an artistic and literary movement bent on recovering the classical tradition and the elegance of the forms of the past as the essence of the Mediterranean. The bust of the dancer was executed just after the outbreak of the First World War, when the artist decided to stay in Paris. Years later, around 1920, the Godard Père foundry, with which Clarà and many of the famous sculptors of the time worked, produced a limited edition of the original in plaster.

The work is small in format but allows Clarà to capture the elegant, capricious and fleeting movement of Isabel Rodríguez, who turns her head and smiles spontaneously. The forced curve of the neck shows the artist’s interest in capturing the dynamism of the turn of the dancer’s head, the instant and its rhythm. It is a partial portrait of a model dancing freely and almost in a trance.