Study of Juana Romani in a Headscarf 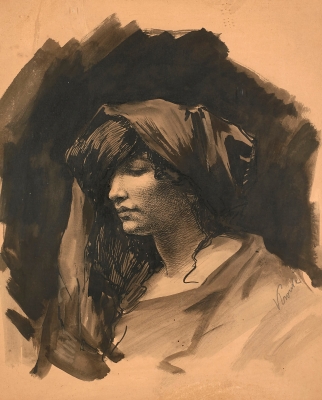 Ethereal and enigmatic, Victor Prouvé’s beguiling ink and wash drawing is almost certainly a depiction of the Italian painter Juana Romani, who modelled for the artist regularly in the mid 1880s. Her traits are visible in many of Prouvé’s compositions from this time, for example in the striking ‘Femme au bouclier’ from 1885 which was exhibited in last year’s Juana Romani exhibition at the Musée Roybet.[i] In both the painting and the present work we see the young Romani, with her dimpled chin and over-swept cascade of hair, on the cusp of her own artistic success. In looking at these images one can understand Georges Derville’s description of her as an ‘Empress from the Byzantine period, with hair that flows over her forehead, bathing it in a golden glow’.[ii]

Born in Velletri, Romani moved to Paris with her family as a young girl. Her first artistic encounters were as a model. Initially spotted by Alexandre Falguière, she went on to pose for Prouvé, Jean-Jacques Henner and Ferdinand Roybet. At the age of nineteen Romani began her training with Henner, before entering the studio of Roybet, later becoming his mistress. Romani’s talent and individuality, apparent in her distinctive and detailed portraits and studies of female mythological and biblical figures, earned her fame and Salon success. She exhibited at the Salon from 1888 until 1904 and earned a silver medal at the Exposition Universelle of 1889. Tragically, her artistic career was curtailed when hallucinations led to her confinement at a psychiatric hospital in 1906 and her subsequent mental decline meant that by the time of her death in 1923, Romani had been completely forgotten. Thankfully today she is well on her way to rehabilitation and the renown she deserves as an important female voice from the fin-de-siècle.

Prouvé was a multi-talented and prolific artist famous in his own lifetime for his Art-Nouveau creations in diverse media ranging from painting, drawing, sculpture, engraving and illustration to metal-, wood- and glasswork. Studying first in his native Nancy and then in Paris under Alexandre Cabanel at the École des Beaux-Arts, he exhibited regularly at the Salon and also showed at two Expositions Universelles. He became the second president of the École de Nancy after the death of Émile Gallé in 1904 and maintained a lifelong affinity and connection with his hometown.

Prouvé’s drawing was owned by the lawyer Charles Auzoux, an important and generous patron of the arts in late 19th-century France, who provided both financial and legal aid to several fin-de-siècle painters and sculptors. Closely connected with Jules Dalou, Jean-Baptiste Carpeaux, Auguste Rodin, Louis Anquetin and, of course, Prouvé, who he first met in 1880, Auzoux always kept his doors open to his artistic friends, providing them with a joyful place of exchange, as well as a refuge when needed.