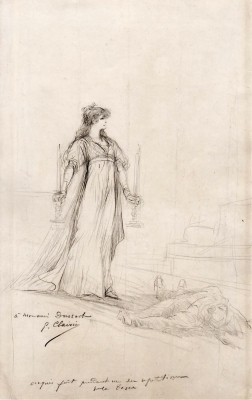 Of all Sarah Bernhardt’s artistic relationships, whether intimate or amical, her friendship with Georges Clairin was perhaps the deepest and most durable, Louise Abbéma withstanding. Beginning as lovers, their association with one another developed into an inseparable friendship lasting fifty years. Frequent muse and model for Clairin, the artist in his turned served Bernhardt as a trusted confident, as well as a patient instructor in drawing.

They first met in 1874, when the 30-year-old Bernhardt was already a star and the handsome and cultivated Clairin, a year older than the actress, a successful Salon artist. Clairin’s most famous image of Bernhardt is the celebrated full-length portrait of 1876, now in the Petit-Palais. Sinuous and seductive, and perhaps even a little disquieting, it was one of Bernhardt’s favourite depictions of herself and she kept it all her life. Over the subsequent decades Clairin would produce many images of Bernhardt, whether as portraits, allegories or, as with the present work, in a theatrical role.

Here Clairin depicts Bernhardt in the role of Tosca in 1887, the same year as the pair found a holiday home for Bernhardt in Brittany, where she built a bungalow for the artist to work in and take sea-weed baths. Tosca, a five-act drama written by Victorien Sardou, opened on 24th November of that year at the théâtre de la Porte-Saint-Martin and, despite receiving initial negative reviews, quickly became one of the playwright’s greatest successes and was toured throughout the world by Bernhardt in the years to come. In fact, it was during a performance of Tosca in Rio de Janeiro in 1906, leaping from the stage, that Bernhardt first seriously injured her right leg. This would eventually result in its amputation nearly a decade later in 1915.

Set in Rome in 1800 after the Battle of Marengo, the melodrama centres around the interlinked lives of the opera singer Floria Tosca, her lover and Napoleon sympathiser Mario Cavaradossi and the ruthless Baron Scarpia, Regent of Police. At the play’s climax, Tosca stabs Scarpia after he has ordered the execution of Cavaradossi, before leaping to her death from the parapets of a castle. Clairin, watching a practice run of the play, has quickly sketched off the moment Tosca strides purposefully forwards to place two candles by the inert body of Scarpa. A photograph by Nadar from the opening night depicts this very moment.

Clairin has dedicated, and presumably gifted, this dynamic sketch to his friend Dussart. Quite possibly this is Léon Dussart, a fellow artist and student of Paul Delaroche.