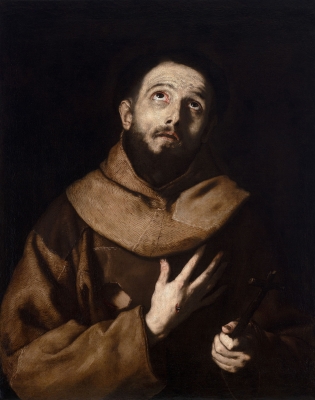 Executed using a striking degree of chiaroscuro that characterises Jusepe de Ribera’s work, this rediscovered painting depicts Saint Francis of Assisi, his shoulders spanning the entire width of the canvas, shown gazing upwards towards the heavens in almost entranced, meditative prayer with his right hand raised in blessing. Ribera grounds this intensely pious moment in reality by employing bold naturalism, while demonstrating his sensitivity to colour and light: the minute application of white paint to create a reflective effect in Saint Francis’ eyes serves to catch the light and make tangible the presence of the divine. Simultaneously, Ribera’s choice to use an almost totally dark-toned colour palette juxtaposes vigorously with these illuminated areas, guiding our eye to his stigmata after receiving the wounds of Christ, while alluding to the gash he suffered in the side of his chest by including a rip on his garb.

One can imagine that due to the small-scaled, intimate nature of this work, it was likely used to aid worship and incite contemplation in a private setting. Ribera’s intensely emotive, naturalistic portrayal – by which there is a notable lack of halo or further suggestion of unearthliness – bridges the disconnect between religious art and human existence, therefore furthering the artist’s aim to create a work of art that encouraged devotion.

Our painting undoubtedly bears similarities to Ribera’s rendition of the same subject in the Pitti Palace, Florence, which is dated to 1643. Despite that work’s larger format of 103 x 77 cm., Saint Francis is shown with the same ascending look, and Ribera has again used a dark, solid background to highlight his figure. There are more overtly religious references in the Pitti Palace version though: a luminosity around Saint Francis’ head produces a more intensely spiritual atmosphere, as does the inclusion of a skull in the foreground – a memento mori widely used as a reminder of the transience of life. Our image arguably demonstrates greater subtly and realism in line with its later execution date of 1648, which only emerged – along with a signature – towards the centre right of the canvas during recent conservation. This is evidenced by a comparison of the positioning of Saint Francis’ head across both compositions: in the Pitti Palace version his head is slanted to one side, in a more statuesque and theatrical manner, while in the Colnaghi picture Saint Francis faces the viewer almost head-on, imbuing his depiction with a more lifelike quality.

Leading up to the middle of 17th century, Ribera was at the height of his career as the foremost painter in Naples, if not the entire Italian peninsula. However, the 1640s also witnessed hard times for the artist, with sickness, a backlog of important commissions, and increased competition from a new generation of talented Neapolitan painters including Bernardino Cavallino (1616 – 1656) and Andrea Vaccaro (1604 – 1670). All of this, combined with the neo-Venetian trends then becoming widespread and popular amongst Neapolitan patrons, may have led Ribera to alter his style from the 1630s onwards. One can observe a newfound ability to soften his technique of vigorous tenebrism, and there was a noticeable switch from quite violent, dramatic scenes to lighter subject matters, freer brushstrokes and the addition of colour, all of which earnt him the reverence which he maintains to this day in the art historical canon. The present painting is therefore an interesting example of Ribera paying homage to his earlier style, through his use of intense chiaroscuro and a neutral colour palette, though he does so in a way that demonstrates a more pronounced pictorial intelligence and a greater awareness of how to engage the viewer.