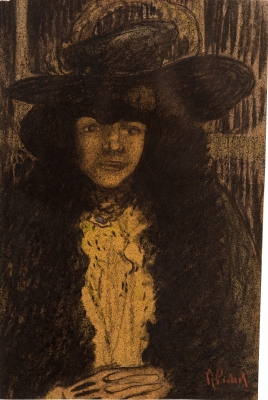 Ramon Pichot was the second son of Ramon Pichot i Mateu from Barcelona and Antònia Gironès i Bofill from Figueres. Both parents were fond of the arts, especially music, and most of their seven children eventually became artists. Pichot’s first known paintings are two small portraits of women from 1889, although his father, who doubted that he could make a living from painting, made him study at the School of Architecture.

Pichot was an artist who fully experienced the Art Nouveau scene of Barcelona in the late 19th century alongside his friends Isidre Nonell, Pablo Picasso, Santiago Rusiñol and Ramon Casas, with whom he shared artistic interests and sensibilities, activities and meeting places, such as the Sala Parés, the Cercle Artístic and the tavern Els Quatre Gats. Like many artists of the time, Paris was fundamental to his artistic career. The French metropolis was the cultural capital of the world and the epicentre of international art at the time – a cosmopolitan city with an infinite cultural offer in terms of art. It is worth noting that, unlike many artists who confined themselves to short stays in Paris, Pichot stayed in the capital and integrated himself into its artistic and cultural circles, where he was influenced by Fauvist and Post-Impressionist artists. He thus had the opportunity to take part in numerous international exhibitions, such as the Salon d’Automne at the Grand Palais, where the Fauve scandal took place (1905).

His work evolved from early Art Nouveau to Post-impressionism in the 1910s, specialising mainly in the treatment of colour. Barcelona, Paris and Cadaqués, in the Costa Brava, were the three places that marked him personally and artistically, and they are abundantly represented in his works. Pichot’s usual subjects were Cadaqués’ landscapes, Hispanic types and portraits.

This work is a portrait of Germaine Gargallo using the technique of “fried” charcoal, typical of his friend Isidre Nonell. Laure Antoine Gargallo (Paris, 1880 - 1948) was a dressmaker, a dancer in some cabarets and a pictorial model for many artists in Paris at the beginning of the 20th century. In 1898 Germaine Gargallo met the painters Ricard Canals and Isidre Nonell, for whom she began to model. In 1890, the two great friends Pablo Picasso and Carles Casagemas arrived in Paris. Nonell left them his studio and there they met Germaine. Casagemas fell in love with the model, but could not satisfy her sexually, which caused him deep frustration. Picasso took his friend to Malaga to make him forget Germaine, but it was to no avail. On the contrary, when Casagemas returned to Paris, he invited his friends and Germaine to dinner at the Café de l’Hypodrome to announce that he was returning to Barcelona for good, but in an unexpected twist, he pulled out a pistol and, shouting “Voilà pour toi”, tried to kill Germaine, although the bullet hit Manuel Pallarés, who ended up deaf and blind in one eye. After the failed assassination attempt, Casagemas killed himself. Some years later, Germaine began a short-lived liaison with Picasso, whom she left for Ramon Pichot, whom she eventually married in 1908.

This is a rather unusual drawing by Pichot, who is better known for his brightly coloured paintings. It is a dark portrait that captures well the expression of Germaine’s face, whose hat is very much of the period.