Portrait of a Young Man Looking Down 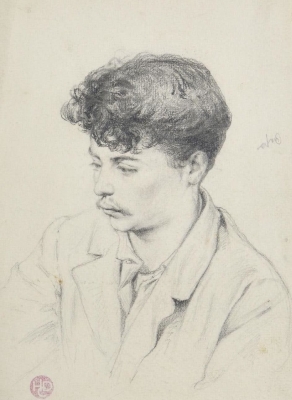 Son of the engraver Louis Dumont, Henri Courselles-Dumont was born in Paris in 1856. By 1873 the young artist had entered the École de Beaux-Arts, studying under Raphaël Collin, Luc-Olivier Merson and Jules-Élie Delaunay. The latter would have a marked influence on Courselles-Dumont, who became Delaunay’s assistant and collaborated with him on frescoes in the Pantheon. Courselles-Dumont exhibited regularly at the Salon from 1882 to 1914 and favoured a Symbolist style inspired by Gustave Moreau. Outside of his frescos, the artist’s most important artistic contribution would be his work as an engraver, illustrating books as well as producing stand-alone engravings. Although a technically very accomplished painter, it is his works on paper and engravings which best reflect Courselles-Dumont artistic ability and give greatest expression to his vivid imagination.

Drawn on Whatman paper produced in 1874, the present work can be dated to this year or soon thereafter, when Courselles-Dumont was studying at the École de Beaux-Arts. The image is likely therefore one of the young artist’s contemporaries in a pensive moment, or possibly a self-portrait, with the downy moustache, tousled hair and ruffled attire of an adolescent. Executed with economy and skill, the drawing displays Courselle-Dumont’s confidence with the pencil at the end of his teenage years.