Portrait of a Tahitian (Tane) 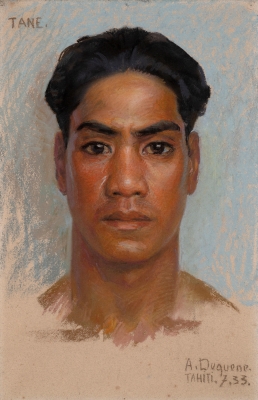 Clearly possessed of an insatiable curiosity, Albert Charles Duquene took advantage of his fortune to be born in a period when long distance travel was becoming more accessible. Born in Lille in 1897, Duquene initially studied in that city before moving to Paris, where he enrolled at the École des Beaux-Arts under the tutelage of Fernand Cormon. A travel grant allowed the artist to spend five months in French Sudan, Upper-Volta, French Guinea and Senegal in 1932. The following year Duquene accompanied a French mission to Tahiti led by the parliamentarian Lionel des Tastes, taking twenty days to reach the island by way of New York and San Francisco.[i] Back in France, Duquene became professor of painting and drawing at the Ecole des Beaux-Arts de Roubaix, holding this position from 1936 to 1962. In between, he found the time to visit Morocco in 1946 and Madagascar in 1953.

When Duquene the island, Tahiti, today part of French Polynesia, a semi-autonomous French administrative region, had been a French protectorate for almost one hundred years. By the 1930s, discontent at French rule was rife amongst the islanders, who were by this time looking towards the USA for support. It was against this backdrop that Lionel des Tastes visited Tahiti, looking to instigate reforms, which culminated in 1946 with the granting of French citizenship to the French Polynesians, as well as the right to vote. The status of the islands also changed from that of colony to overseas territory.

Duquene’s known Tahitian production consists of landscapes, Gauguinesque scenes of everyday life and a series of bust-length portraits executed primarily in pastel. These latter are amongst the most original and interesting of the artist’s Tahitian work, conveying a strong sense of character and individuality, with the names of the sitter marked at the upper left. The sitter in the present work, named Tane, appears to be young man in his twenties, though nothing else is known about neither him nor his relation to the artist. Duquene depicts the Tahitan face on, looking resolutely out at the viewer, his strong features offset by a light blue background.