Portrait of a Man, with a cigarette 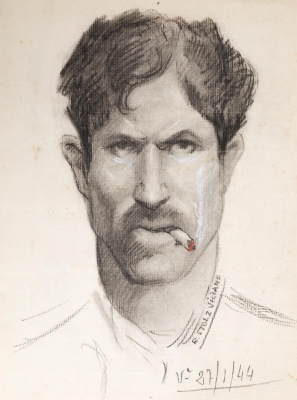 Eyebrows arched, staring confrontationally at the viewer, with a lit cigarette dangling out of the corner of his mouth, Rámon Stolz Viciano’s sitter makes for a very characterful subject, depicted almost as a comic book villain. Square-chinned and chiselled jawed, he has the looks of a young Marlon Brando, though in one of his most menacing roles! In reality, the sitter hails from the artist’s native city, Valencia, as the ‘Va’ just before the date confirms, though who can say whether the aura of toughness is feigned or real. Whoever he is, the sitter, clearly capturing the imagination of this forgotten artist, has been skilfully portrayed by Stolz Viciano.

Born in Valencia in 1903, Stolz Viciano came from an artistic background. His father was the painter Rámon Stolz Seguí and his mother was Teresa Viciano Martí, sister to the sculptor José Viciano Martí. The young artist began his studies at the Academia de Bellas Artes de San Carlos of Valencia, moving to Madrid in 1924 at the death of his father. Here he enrolled in the Real Academia de Bellas Artes de San Fernando, studying under the portraitists Manuel Benedito and Anselmo Miguel Nieto.

Between 1926 and 1935 Stolz Viciano travelled widely in Europe, visiting Belgium, Holland, France, Germany and Italy. Early on he gained a deep-seated interest in frescos, spending much of the rest of his career restoring Spanish frescos, as well as painting his own. It is for this that Stolz Viciano is best known today, considered the leading Spanish frescoist of the 20th century. Stolz Viciano’s most important commission was for the fresco inside the Monument of the Fallen, a now controversial memorial in Pampalona commemorating the 4,500 Navarrese Nationalists who died during the Spanish Civil War. At nearly 700 metres squared, it is the artist’s largest work. Stolz Viciano was also an easel painter and, as the present work attests, a talented and individual draughtsman.