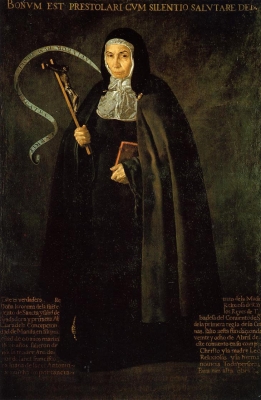 Discovered in the Convento de Santa Isabel de los Reyes, Toledo, by restorer Jerónimo Seisdedos in 1931;
Sold by the nuns to Alejandro Fernández de Araóz, Madrid, in 1944;
His widow, Madrid;
Thence by descent within the Araóz family.

This imposing portrait of Mother Jerónima de la Fuente, a Spanish nun from the order of the Poor Clares, is considered a highlight within Velázquez’s oeuvre as evidenced by its continuous presence in all major exhibitions and publications on the Spanish master over the last two decades. In the words of Xavier Bray, “the rugged features of the sixty-six-year-old nun in a realistic and uncompromising fashion, creat[e] a strong sense of her physical presence and profound spirituality...”1 An image of striking psychological penetration, this painting is still regarded as a perfect example of Velázquez’s unparalleled skills as a portraitist.

The following note by Guillaume Kientz was printed in the 2015 catalogue, Velázquez, published on the occasion of the eponymous blockbuster exhibition held at the Grand Palais in Paris. It has been translated from the original French text by Colnaghi, London:

It was in 1972 when the portrait of the Venerable Mother Jerónima de la Fuente, now in the Prado Museum, was exhibited for the first time. The painting, then attributed to Luis Tristán (c. 1585 – 1624), came from the convent of Santa Isabel de los Reyes in Toledo. A first cleaning quickly revealed Velázquez’s signature, which many considered suspicious, as well as the date 1620. In 1931, a second version was discovered, also belonging to the Franciscan convent, which showed few slight variations to the first canvas. In 1944, the two paintings were sold to the Prado Museum and a private collector, respectively, where they remain.

As specified in the apocryphal inscription at the bottom of the painting, the portrait of Mother Jerónima de la Fuente was created on the occasion of the nun’s stay in Seville between June and August of 1620. The Poor Clare, sixty-six years-old at that time, she was on her way to Cadiz to embark for the Americas and Manila, where she was going to found the first sister convent in the New World. Perhaps Pacheco (1564 – 1644), during his visit to Toledo in 1611, met her and took the opportunity to mention that his young protégé, Velázquez, could paint her portrait. Santa Isabel de los Reyes was a royal foundation, and the nun enjoyed high popularity in Castile, which is why it was a good strategy to associate his son-in-law with her at the start of his career as an artist. The nun had a strong and charismatic personality among the female branch of the Franciscans. Venerated during her lifetime, almost like a saint, her intention was to leave an image for her country that would reflect the traits of her character and her undivided virtue. Bible and Crucifix in hand, in the attitude of a missionary, she seems extremely determined to convert souls.

The formula adopted for this portrait deliberately imitates hagiographic representations. The phylactery flowing from her face belongs to this tradition. Wrongly considered apocryphal, the parchment was removed from the Prado painting when it was restored. Fortunately, it is preserved in this original version of the portrait. Here we can read an extract from the Psalms (XVII, 15): "I shall be satisfied when he is glorified". On the upper part, another inscription quotes the Book of Lamentations (III, 26): “It is good to wait quietly for the salvation of the Lord”, a scriptural echo from the closed book that she is holding, which is materialised through her severe look and closed mouth.

The recent and rapid beatifications and then canonizations of Spanish religious personalities, which had taken place in the first decades of the century (Ignatius of Loyola, Thérèse d'Avila, François Xavier), had given rise to a deep and exalted desire for holiness. Images were a good strategy to work towards achieving such a recognition. Like Mother Jerónima in Toledo, where attempts to compile stories of her qualities and prowess were made, in Valencia there were failed attempts to consecrate Father Jerónimo Simón, who died in 1612. His image, widely spread through prints, was crucial to his later veneration, giving the faithful a visual source for their devotion. In format as well as in intention, the portrait of the Franciscan nun obeys the same rules, according, of course, to the recommendations that were surely made to Velázquez.

The painting is distinguishable through its strong plasticity and even resembles the sculptures of the time. The psychological intensity and manly robustness of the figure give the sitter an imposing presence. By removing all physical beauty, the painter avoids the pitfall of female seduction, a constant concern among the authorities on religious images. The painting had to be, on one hand, a commemorative work, and, on the other, an exemplary image.

The main formal difference between the two versions of the Jerónima de la Fuente portrait is the position of the Crucifix, which in the Prado painting is placed towards the sitter, and in the present work, it is turned towards the viewer instead. Julián Gállego saw in this variation the two sides of the Mother’s devotion: meditation and evangelization. The Crucifix, in a Franciscan context, also refers to the mystical episode of Francis d’Assisi’s reception of the stigmata. Jerónima was known to have practiced penitence, including attaching herself on a cross so that she could re-enact the Passion of Christ first-hand. The Crucifix has been related to a copy after a bronze original, supposedly derived from a drawing by Michelangelo, which Pacheco owned and which Velázquez could have used as a model for this composition. The radiograph of the Prado portrait shows that the contours of the cross are slightly risen, meaning that it was painted later, as a second step, on top of the cloak, unlike in the present painting, in which the position of the cross seems to have been fixed from the start. In the latter work, the simplified, lighter handling, as well as the absence of pentimenti, suggests that it is an autograph replica of the Prado painting. In view of its exceptional quality, its authenticity has never been questioned. The difference in the layers of the ground between the two pictures links the first work to Velázquez’s early years in Seville, and the second to his early days in Madrid. This may indicate a later dating for the present picture, perhaps between 1623 and 1626. However, this needs to be taken with caution, for this thesis has never been confirmed by either contemporary sources or stylistic analysis.

If we never manage to know why there are two versions of the same portrait, it is possible, as Javier Portús suggests, that one was intended to decorate the convent in Toledo, while the other would have stayed in the chapel of the church that was owned by Jerónima’s family. There is a third version, depicting her bust, which is considered an old copy, possibly by the workshop.