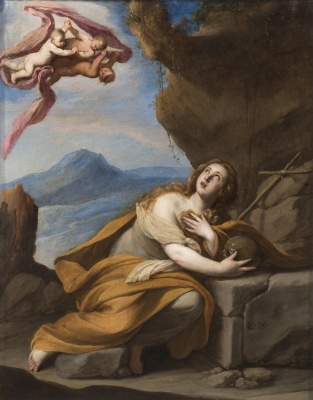 Antonio Ruffo (1610-1678), Principe di Scaletta, Messina, Sicily (recorded in his inventory of 1678);
Infante Sebastián Gabriel de Borbon y Braganza (1811-1875);
By descent from his heirs to the Duke of Hermani y Ansole;
The Dowager Duchess of Hermani;
The Dowager Marchioness of Borghetto;
By descent to the previous owner.

Massimo Stanzione was a leading figure in the Neapolitan Baroque in the first half of the seventeenth century, along with his rival, Jusepe de Ribera (1591–1652). Trained in the studio of Fabrizio Santafede (1560–1633), he also worked in Rome, where his activity in the Santa Maria della Scala church is documented. He moved to Naples in 1630 and remained there until his death in 1656.

This painting of Mary Magdalene, who is depicted here meditating in a grotto, is related to two other works by Stanzione, both of which can be found in the Certosa di San Martino, Naples: the Adoration of the Shepherds in the Sala del Capitolo and the Madonna and Child with Saint Ugona and Saint Anthelm in the church. In the upper margin of all three paintings, one can note a similar group of young angels holding a piece of cloth buffeted by the wind.

Judging from its style and rich luminous colours, this Mary Magdalene can be dated to the early 1640s and shows the influence of Domenichino (1581–1641), the Bolognese master who was active in Naples too. The painting is also comparable to Ribera’s Vision of Saint Bruno of 1643 - commissioned by Giovan Battista Pisante, prior of the San Martino monastery in Naples - which may have been a direct source of inspiration for Stanzione. Much like the Saint Bruno, our picture was likely painted for private devotion, as suggested by its small size. Mary Magdalene was a very popular subject in the art of the Counter-Reformation; she was a perfect example of penitence and a model of repentance.

A note on the provenance

This work once belonged to Prince Sebastián Gabriel de Borbón (1811–1875), the grandson of Prince Gabriel, who was the son of Charles III. On the reverse it bears his collector’s mark: the letters SG, with a crown above. Part of Sebastián Gabriel’s collection was inherited from his first wife, Amalia of Naples (1818–1857), though it is not known whether the present painting entered the collection this way.