Marble Head of a Woman from Magna Graecia 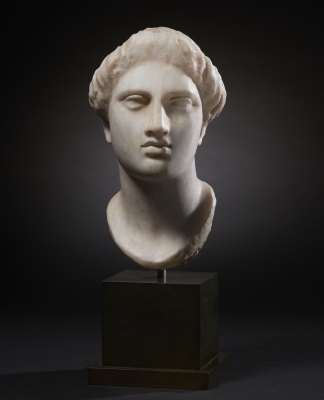 This marble head comes from Tarentum (modern Taranto), called Taras by the Greeks, a city in Magna Graecia. The name for this region of Southern Italy and Sicily, translated as “Greater Greece,” comes from the fact that so many Greeks moving from the mainland colonized these shores that the number of Greek settlers living in Italy exceeded the population of the mainland. Due to this fact, paired with the eventual colonization of Greece by the Romans, some of the greatest works of Greek art are discovered in southern Italy and Sicily. The city of Taras was founded by the Spartans in the 8th century BC and was a major economic and political center in the area during the 4th century BC, the time to which this sculpture is dated.

Our bust of a woman survives in near-perfect condition. The base of the neck is finished to be set into a statue. Due to the precious nature of marble and its rarity in Southern Italy, the head was most likely set into a body made of limestone or some other local stone. There is a skillful textural contrast between the roughness of the hair and the smooth skin of the face, and the figure’s expression and rather idealized proportions are in imitation of the Classical style, pioneered by Athenian sculptors of the previous century. Additionally, traces of red pigment have been found in the bust’s hair. This piece is an important sculpture from a major Southern Italian workshop at the height of the Classical period.

Marble Head of a Woman from Magna Graecia