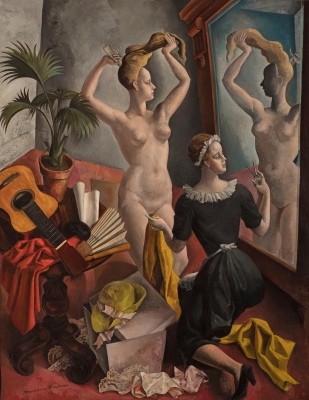 Marià (in Catalan) or Mariano (in Spanish) Andreu was an artist who complemented his self-taught training with sporadic sessions at the school of the Catalan painter Francesc A. Galí (1886 - 1969). Andreu later completed his studies in London at the School of Arts & Crafts. On returning to Barcelona he began to exhibit his work in group exhibitions, mainly drawings of a sarcastic and hedonistic nature. His exhibitions at major art galleries in Barcelona, including the Faianç Català in 1911 and 1913, at the Galeries Laietanes (1916), at the Cercle de Sant Lluc (1918) and at the Sala Parés (1933), are particularly noteworthy.

In 1920, after a trip to Italy, he settled permanently in Paris, where he developed an artistic career full of critical and commercial acclaim, both at home and abroad. During this period he alternated painting and drawing with his work as a set and costume designer in European theatres, mainly in Paris but also in Munich and London. Marià Andreu regularly exhibited his works at the Paris salons, especially between 1920 and 1937, as well as at major shows in Tokyo, Osaka, Brussels, New York, Buenos Aires, Los Angeles, Madrid and Barcelona. In addition to that, between 1929 and 1939 he sent canvases every year to the Pittsburgh International Exhibition of Contemporary Paintings and Sculpture, where he won several prizes and mentions.

The present work, Le Travesti et le miroir, is one of Andreu’s most interesting paintings from the time when he was at the peak of his success in the French Salons. Andreu normally exhibited at the Salon d’Automne, of which he was a sociétaire. The painting was exhibited at the 1928 Salon and perfectly illustrates both the artist’s pictorial interests and some of his hobbies: theatre, music and show business. As for aesthetic references, Mariano Andreu, following in the footsteps of Togores and other artists of the time, developed a style of painting that had much to do with capturing and exploiting the connection between Mediterranean classicism and certain Cubist approaches, for example through the forced and geometrical disposition of the elements that make up the composition and its angular and somewhat disturbing perspective.

Andreu depicts the interior of what is probably a dressing room, with the main figure standing at its centre almost like an imposing classical sculpture. The figure, described in the title as the travesti (i.e., a character in an opera, play, or ballet played by a performer of the opposite sex), is the focus of interest, and her flesh, for which Andreu uses pastel and matt tones, shapes and draws the silhouette and volume of the naked body reflected in the mirror. Around this figure, Mariano Andreu groups a series of complements that swirl in a lively circular arrangement that emphasises the importance of the naked figure. Thus, the delightful still life of the table with the guitar, the palm tree, the mask and the reddish clothes; the open box with the hat with a pink ribbon, surrounded by wrapping paper, rags and pieces of cloth; and, finally, the mirror and the maiden holding a pair of scissors. The latter turns her face backwards, caught in a forced, almost impossible twist which, together with the perspective of both the mirror and the room, has much to do with the multi-faceted images typical of Cubism that many realist painters incorporated into their compositions at the time. In this respect, both the execution of the work and the brushstrokes and the carefully-rendered volumes of the elements and figures can be connected with the aesthetics of the German New Objectivity.