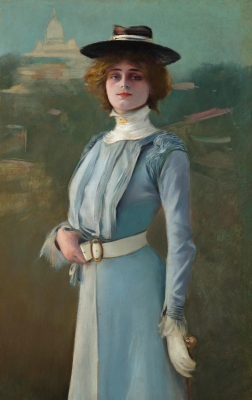 In March 1900, Ramon Casas settled in Montmartre after he had visited the Universal Exhibition held in Paris that year. The painter recounted his experiences at the event for the Catalan artistic magazine Pèl & Ploma and also took the opportunity to produce a series of works which, unlike those made on his previous trips to Paris, did not focus on bohemian life but on capturing much more elegant and sophisticated atmospheres. This led him to move away from Spanish-style portraits of women in typical chulapa dress, opting instead for depicting the sensuality of modern women, often set in an urban environment or in intimate interiors, which he used to experiment with lighting effects.

This work is part of this new turn in the evolution of Ramon Casas’s mature painting. It is an almost full-length portrait of an elegant woman wearing a sky-blue dress, which allows Casas to excel in capturing the nuances and variations of the same colour. The model is Clotilde Pignel, known as Clo-Clo because that is how she signed her letters. She was the daughter of the Parisian businessman who owned the Pignel Dupont shop on Rue Lepic, which sold frames and materials for artists. Clotilde had a romantic relationship with the painter Santiago Rusiñol between 1892 and 1894, and from then on she was also a friend of Ramon Casas, for whom she became one of the main models during his stay in Paris in 1900. Other works by Casas from the same period also feature Clotilde Pignel: Mlle Clo-Clo, on the cover of issue 53 of Pèl & Ploma (June 1900), Pierrette en deuil, La parisenca and La grasse matinée, all of which were on display at the Sala Parés in Barcelona in the Second Pèl & Ploma Exhibition. This recurrence, as well as Miquel Utrillo’s references to the model, lead us to believe that Casas was strongly attracted to Pignel.

In the present work, Casas cuts out Clo-Clo’s slender, elegant figure against the Parisian landscape, with the hill of Montmartre and the Sacré-Cœur in the background (very similar to Casas’s famous portrait of Pablo Picasso painted the same year), set against a bluish sky that perfectly matches the tones of the dress. The model is fashionably dressed and gazes at the viewer in a slight contrapposto that allows the painter to recreate Clotilde’s facial features and her dreamy, sensual and mysterious gaze, underlined by the shadow of the hat. Casas masterfully captures Clo-Clo’s psychology and connects it with the atmosphere and character of Parisian bohemian life. Thus, the expressiveness of the face manages to become the focus of the composition. The rest of the figure is shown in a synthetic way, devoid of superfluous elements. Despite the model’s static pose, Casas achieves a subtle but effective dynamism in the composition through the slightly dissymmetrical positions of her arms, their curves and the graceful twist of her torso. The folds suggested by the chromatic gradations around the blue of the upper part of her dress contrast with the long, broad brushstrokes Casas uses on the skirt, for which he creates a compact surface of high aesthetic value.

Although the canvas was cut, probably to adapt it to a decorative panel, it is one of Casas’ masterpieces from his third Parisian period and his maturity. It is one of the most complete portraits that evoke the bohemian world of Montmartre, which constantly drew the Catalan painter’s attention.