Head Study of an Algerian Tirailleur and Senegalese Tirailleur 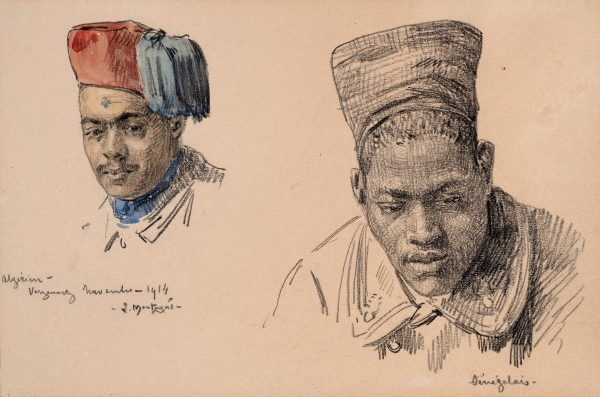 Executed on the battlefields of France during the first winter of World War I, Louis Agricol Montagné’s two studies depict four tirailleurs, soldiers recruited from the French colonies. Captured by Montagné during a moment of respite, these character studies are a reminder of the crucial role played by colonial soldiers in the French Army from the outset of the Great War.

The Algerian tirailleurs, with their distinctive tasselled fez and blue jacket, were formed after the conquest of Algeria in 1830 and fought with distinction in many French 19th-century wars, notably in Crimea and the Franco-Prussian War of 1870-71. However, the scale of the First World War ensured that they were mobilised in greater numbers than ever before, with 190,000 Algerian tirailleurs sent to Europe between 1914 and 1918. Fighting in all the major campaigns of the War, including the Marne, Verdun and the Somme, 35,900 Algerian tirailleurs lost their lives over the course of four years. The soldier drawn by Montagné, as denoted by the blue tattoo in the centre of his forehead, is a Berber.

Studying in Paris under Fernand Cormon, Montagné started his career as a frescoist, working at the Gare du Lyon in 1900. He exhibited regularly at the Salon d’automne from 1901 and his success there gained the artist a travel scholarship in 1911. Montagné’s role during the First World War is not well-known but he seemed to be active as an artist, as these studies and other sketches from the war confirm. Returning to his native Avignon in 1920, Montagné served as the director of the École des Beaux-Arts until 1928.