Head study of an adolescent 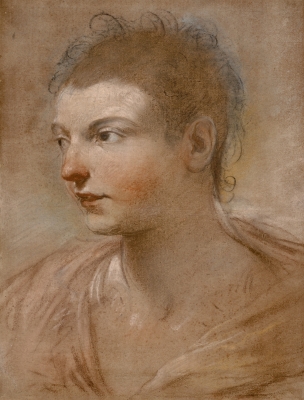 This delicately rendered pastel study of an adolescent is a unicum within the catalogue of Giuseppe Maria Crespi’s graphic works, as it currently stands. However, it is probable that the full range of his drawing habits has not yet been credited. Crespi trained in Bologna, in the Carracci tradition, and was known for his extensive private study of the Carraccis’ own frescoes. As such, he too would have likely produced large numbers of preliminary studies from life as part of his working methods as a painter. It would be surprising for such an innovative and rule-breaking artist ever to have limited himself so.

Pastel head-studies had long been fashionable in Bologna, and are a small but important component within the graphic oeuvres of both Domenico Maria Canuti, under whom Crespi worked for a time, and of Guido Reni, who had been Canuti’s own master and, of course, a major influence on every Bolognese artist thereafter. Perhaps Crespi even learnt to use pastel directly from Canuti, since the present work certainly shares some technical characteristics with those of the older artist.

As rendered in pastel, the physiognomy of this youthful face, with its ruddy round cheeks, long nose, strong chin, arched eyebrows and full, half-opened lips, can be favourably compared to several figures, both male and female, in Crespi’s better-recognised paintings. For example, there is Crespi’s Girl with a cat, in the Fitzwilliam Museum, or his Madonna and Child in a private collection. But the closest and most striking comparison is to be made with the Young man with a helmet, itself an anomalous work, with its intimacy being more typical of Crespi’s drawings, as the Nelson-Atkins Museum well notes. Here, though dressed in costume, the figure has also been shown in half-profile (not coincidentally, at just the extreme angle that Reni had always preferred). The similarities are even strong enough for it to be posited that the same model may have sat for both of these works, although, he might appear just a couple of years younger in the pastel. If so, that would date the pastel to circa 1725, in the latter part of Crespi’s career, when he was increasingly reflecting not just on his own earlier work, but back on the whole Bolognese tradition.

We are grateful to Professor Daniele Benati for confirming the attribution to Crespi.