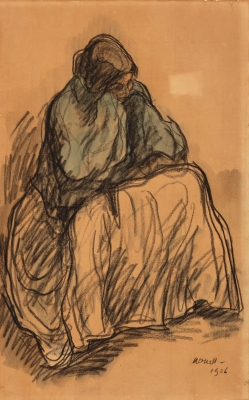 Nonell showed a strong interest in the human figure and in the most disadvantaged members of society, probably influenced by his teacher Lluís Graner, who used street beggars as models. Nonell’s caricatures, published in the Catalan newspaper La Vanguardia, where he collaborated, were not intended to ridicule but to denounce the conditions of poverty in the city. Nonell’s interest in the human figure reached its peak after his stay in the Pyrenean resort of Caldes de Boí, where the artist travelled in the summer of 1896, with his friends and fellow artists Ricard Canals and Juli Vallmitjana. There he was deeply impressed by the malformations of numerous inhabitants of this isolated community in the Pyrenees, where the lack of iodine in the drinking water caused numerous cases of hypothyroidism, better known at the time as ‘cretinism’. This was the origin of Nonell’s well-known series of drawings of ‘cretins’ (i.e. hypothyroidism sufferers) made in Boí.

During his first trip to Paris in 1897, Nonell was amazed by the work of Toulouse-Lautrec, with whom he shared an eagerness to denounce the squalor of brothels and nightlife. In the French capital, Nonell’s drawings were hugely successful, to the extent that they were exhibited regularly at the Champ de Mars and at the gallery Le Barc de Boutteville. Although Nonell returned to Barcelona for good in 1900, his drawings and paintings continued to be well received in the Parisian artistic scene.

Nonell’s later period is undoubtedly the best of his production, with pride of place being reserved for his magnificent series of paintings and drawings of gypsy women.

The present drawing, executed in 1906, belongs to this series. The technique is usual for Nonell’s drawings of this period: lithographic Conté crayons, watercolour, coloured pencils and sanguine. He adopted these materials in his drawings from 1906 onwards and employed a softening effect on his vigorous strokes, hinting at the subtle change that his palette would gradually undergo.

Nonell had many gypsy models – Juana, Leonor, Tana, Manuela, la Chata and Soledad – but his favourites, both for paintings and drawings, were Consuelo, who died in an accident in 1905, and her grandmother. Nonell had them photographed by his friend Francesc Serra when the latter made a series of portraits of artists in his studio. It is worth noting that it was from 1906, after Consuelo’s death, that Nonell produced his best-known series of drawings of gypsy women.

All of the drawings in the aforementioned series, however, were not exhibited until a few years later, in 1909, because from 1903 onwards Nonell decided to focus much more on painting and his activity as a draughtsman took a back seat. From 1909 he gradually abandoned the subject of gypsy women to concentrate on still-life painting, which he developed until his death in 1911.