Girl in a Manila Shawl 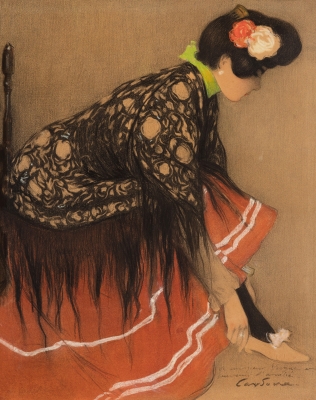 Joan Cardona, born in Barcelona in 1877, showed an early passion for painting and drawing, and at the age of seventeen took part in the second General Exhibition of Fine Arts in Barcelona with an oil on canvas called El Zagal (‘The Young Shepherd’).

As a result of the artistic and cultural interests he shared with his friends and fellow bohemians, all of them regulars at the Els Quatre Gats tavern in Barcelona, he made his first trip to Paris to experience modern Parisian life. Even so, he did not neglect his relationship with Barcelona. Indeed, in 1898 he began to collaborate with local art magazines, starting with El Gato Negro; this is a field he cultivated for years, until he returned to Barcelona from his last trip to Paris, after which he devoted himself exclusively to painting.

Cardona arrived in Paris for the first time, as mentioned above, in the spring of 1898, although he did not establish his habitual residence there until 1900. That was the year of the Exposition Universelle, which made Paris the centre of international cultural life. Cardona, although faced with the difficulties of a young, foreign artist, began a passionate activity, making drawings from life in which he depicted scenes of everyday life in Paris and its inhabitants, featuring almost always women. He settled at 17 Rue Joseph de Maistre, in the 18th arrondissement of the capital, opposite the Montmartre cemetery.

The artist focused his production on depicting glamorous, elegant and cosmopolitan women; a genre that was very fashionable in Paris was the so-called espagnolade, an idealised depiction of Andalusian and Madrid clichés, taken from a romanticised vision of Spanish popular culture. Cardona executed this type of composition especially for the covers of the magazines for which he worked, such as Le Rire and Le Frou-Frou. This is precisely the genre to which this drawing belongs, with a girl in profile, dressed in a wide red skirt and a splendid Manila shawl, putting on a high-heeled shoe and wearing two large carnations in her hair.