Execution of Saint John the Baptist 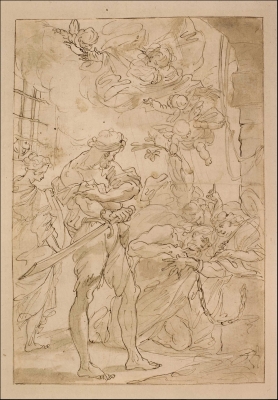 Together with his younger brother Gaetano (1734 – 1802), Ubaldo Gandolfi was among the outstanding painters in eighteenth-century Bologna and was active throughout northern Italy. This work is a preparatory sketch for a major commission in the town of Vercelli, midway between Milan and Turin. In the mid-1770s, Ubaldo painted three altarpieces for religious institutions in the city. These have been reckoned among his finest work and reveal his response to the work of Tiepolo, which he most likely knew second hand through the Venetian experience of his brother, and his meditation on the great tradition of Bolognese painting going back to Ludovico Carracci in the early seventeenth century. Ubaldo’s first documented altarpiece in Vercelli, for the church of the Holy Spirit (Santo Spirito), was commissioned in 1774. The altarpiece in San Michele, for which this work is a modello, was possibly commissioned in 1776, when the Confraternity of the beheaded Saint John the Baptist (the Compagnia di San Giovanni Decollato) was founded: it was for their chapel in the church that the painting served as an altarpiece.[i] Confraternities dedicated to the beheaded Saint John the Baptist often ministered to prisoners condemned to die, as was the case with the Confraternità di San Giovanni Decollato in Rome.[ii] This function would explain the character of Ubaldo’s altarpiece, with its emphasis on salvation at the time of death through God's miraculous intervention.

The subject of the present drawing is based on the Gospel accounts: Matthew 14:1–12, Mark 6:14–29, Luke 9:7–9. King Herod had unlawfully married his brother’s wife, Herodias, and John had denounced him for this, earning the king’s enmity. When Herodias’s daughter pleased the king by dancing before him, she famously asked as her reward that John’s head be brought to her on a platter. The story was a frequent subject of medieval and Renaissance painting. The legend of Salome’s presumed love for and rejection by Saint John was much embroidered over time[iii] and has enjoyed modern celebrity through Flaubert's Trois Contes of 1877, Oscar Wilde’s play, Salome, of 1891, and Richard Strauss’s opera, based on Wilde’s play and first performed in 1905.

Gandolfi remains faithful to the Gospel account, except in the depiction of a miraculous apparition of God and angels, with its emphasis on salvation. The site depicted in the picture is a prison cell defined by a flight of stairs, a barred window, and a stone block to which Saint John is chained—as described in Matthew. A reed cross — the saint’s traditional symbol — is propped against the bottom step. The foreground is dominated by a vigorously posed, sword-wielding executioner who rolls up his sleeve in preparation for beheading the saint, shown kneeling, his hands placed affectingly over his breast, his head bowed in prayer. The cell is invaded by a host of angels who minister to the saint: a flying cherub extends the lily of martyrdom to him while in the background a female figure holds the gold charger on which his head will be placed to present to King Herod; above, in the clouds, God the Father spreads open his arms to receive the saint’s soul into heaven.

Two compositional works exist: one in Palazzo Rosso, Genoa,[iv] the other is an oil sketch rediscovered and acquired in 2013 by the Metropolitan Museum of Art, New York.