Dutch inland waters, presumably the Wijkermeer, with a 'Veerkaag' ship 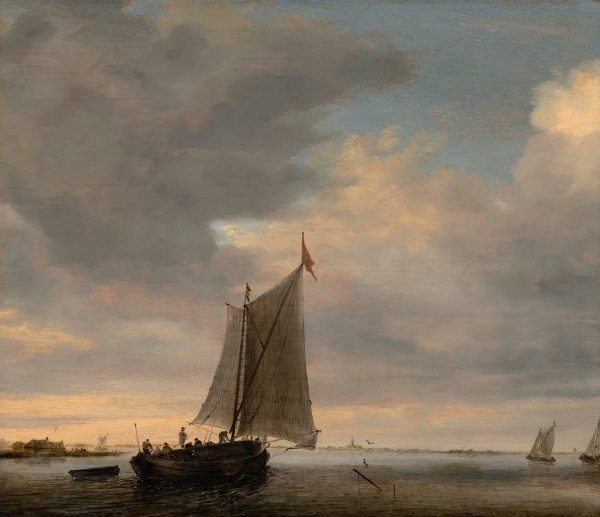 This beautiful and atmospheric painting, signed and dated 1647, belongs to a period when Ruysdael created some of his finest marine paintings. During this phase of his activity, which was ushered in by such works as the View of Beverwijk on the Wijkermeer of 1643 in the Mauritshuis, The Hague, the artist moved away from his earlier riverscapes, broadening his compositions and painting with an increasingly silver tonality. The banks which hem in the boats in his earlier riverscapes are pushed into the background and a much more dominant role is given to the sailing boats that criss-cross the large expanses of inland water.

During this period, Ruysdael was undoubtedly influenced by Van Goyen’s paintings of the 1630s as well as by those other fathers of Dutch marine painting such as Jan Porcellis and Simon de Vliegers, but he also made a highly individual contribution to the genre, by the subtlety of his approach. As Stechow observed, Ruysdael deliberately eschewed stormy and dramatic marine subjects painted on the open sea, in favour of clear, calm, inland seascapes marked by their serenity, their subtle observation of light and the shifting effects of clouds moving over the water and a greyish tonality akin to that of old silver, which is also found in Vlieger’s best works of the 1640s. In the Mauritshuis’ View of Beverwijk on the Wijkermeer, painted four years earlier than our picture and showing a similar inland seascape, ‘the grey’, as Stechow observed, ‘still shares the lemon-yellow and pink tones of Ruysdael’s country landscapes of 1641, but increasingly the silvery grey tone prevails as can be seen in the undated painting in Frankfurt and then the beautiful example of 1647 from Dr Heilgendorff’s collection.’ The present picture, the one described by Stechow as then in the collection of Dr Heilgendorff, is more subdued than in the Frankfurt painting, where the far bank is still painted with strong greens and yellows. With its subtly modulated tonality, it epitomised the artist’s development towards an increasingly subtle handling of colour, light and tone in his marine paintings of the later 1640s.