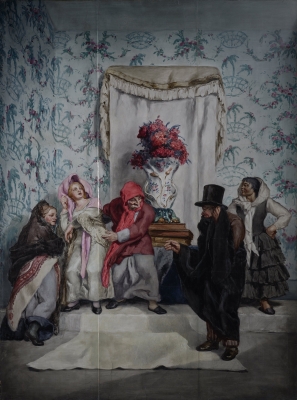 Coming from a family of industrialists, Josep Maria Sert was never interested in the profession imposed on him. In fact, although from the age of eighteen he went to his father’s factory every day, he devoted himself to drawing and attending evening classes at the School of Arts and Industries and Fine Arts, also known as the Llotja. He soon came into contact with the artists and intellectuals of the Cercle de Sant Lluc. In particular, he formed a close friendship with Ramon Casas, Santiago Rusiñol and Miquel Utrillo, who, although ten to fifteen years older than Sert, had lived for long periods in Paris; the accounts of Parisian life and the artistic movements that the trio had experienced in the City of Light were to have a decisive influence on the young artist, who soon made the decision to visit Paris.

Indeed, after the death of his parents released him from his family obligations, Sert arrived in Paris when he was twenty-five. Although he cultivated and maintained friendships with Santiago Rusiñol and Miquel Utrillo in the capital, Sert was never attracted by the bohemian atmosphere of Montmartre and Montparnasse. This may be the reason why, stylistically, he distanced himself from the avant-garde schools that dominated the artistic scene in Paris and cultivated instead his own personal style.

Sert was influenced by the great masters of the Renaissance and Baroque, such as Michelangelo Buonarroti and Peter Paul Rubens, as well as the great Spanish painter Francisco de Goya. ‘Sert’s work is as much like Tiepolo or Michelangelo as [Catalan painter Hermen] Anglada’s women are like Parisian women, or Zuloaga’s models like Goya’s; but his technique is totally modern, like theirs, but much healthier’.[i]

From Goya, in particular, he received a taste for popular costumbrista themes, in which there was a certain idealisation of Spanish folklore. This is reflected in this work, called Escena costumbrista, but which is also known as La ofrenda (‘The Offering’), because a young girl wearing a pale pink shawl is offered to the man in the foreground. Also present in this work is the monumentality and grandiloquence of Sert’s figures, who was fond of picturesque iconography with titanic, muscular figures - a legacy of the Renaissance masters mentioned above.