Christ at the Column 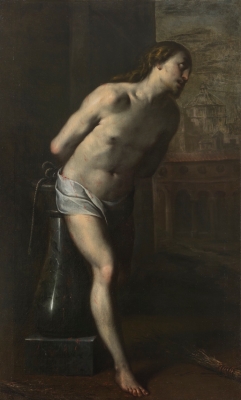 This powerful and moving devotional picture shows Christ bound to the column following his Flagellation. His torturers have departed leaving behind their scourges and spots of blood are visible on his body, smearing the column and lying in streaks on the ground. On the right-hand side in the background is a great, centrally-planned polygonal building intended to represent Solomon’s Temple but, with its lantern tower, which is very similar to Lombard churches of the sixteenth century. The portico visible on the lower part and the arcade which resembles a cloister are an allusion to the Praetorian Palace of Pontius Pilate, the scene where the Flagellation was traditionally set.[i]

Of particular significance is the column of the Flagellation itself, which is considerably shorter than the other columns shown in the picture and which has an uncommon flared shape similar to the column of a balustrade (even if not round as in the column shown in the painting), and an unusual dark streaked marble colouring. This is not just a whimsical invention of the artist, but a clear reference to a famous Roman relic of Christ’s column, 63 cm. high by 40 cm. wide at its base, which was kept in the Basilica of San Prassede in Rome where it had been an object of veneration since the beginning of the thirteenth century. Although the base of the relic in San Prassede is shaped differently to the column shown in our picture, its overall baluster profile and the colouring of the marble - dark with light streaks - is sufficiently similar to suggest that the artist must have had this in mind.

The strongly devotional character of the painting reflects the cultural climate of Counter-Reformation Milan during the period of San Carlo and Bishop Federico Borromeo. Our painting also reflects the influence of the work of Cerano and Giulio Cesare Procaccini, both of whom were singled out by the eighteenth-century historian Pellegrino Orlandi as models for the young artist during his formative years.[ii] If the concentrated severity of the scene and the lividness of the skin on the figure of Christ can be linked to Cerano, the strokes of golden light on his hair and his tearful face reflect the influence of Procaccini. This combination of characteristics provides good stylistic evidence for the attribution of the present unpublished work to the youthful Carlo Francesco Nuvolone, an important and prolific figure in the Lombard Baroque.