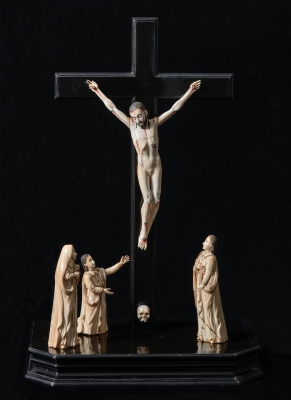 We have before us here one of the most highly-prized pieces of Filipino art, an ivory carving. This exquisite Calvary stands as a compositional rarity, as sculptural groups are far less common than the more frequently-occurring individual depictions of Christ, the Virgin and a wide range of saints.

The religious subject matter of these works leads us to date the emergence of this artform to soon after 1565, the year when, following the conquest of the Philippines, the fleet linking Spain with its overseas territories was completed. As would be the case with the artistic development in New Spain and the rest of the American territories under the Spanish Crown, all of the artistic output was part of the Habsburg House of Austria’s civilizing efforts and, as such, formed part of the evangelical mission being driven by the Catholic Church, particularly intense and visible following the ecumenical Council of Trent (1545-1639).

This particular idiosyncrasy helps us to understand the exceptional aesthetic nature of an artform we might well consider hybrid, given it strikes a perfect and serenely harmonious balance between a technical and visual lexicon with a slight Oriental touch, and a subject matter and iconography of clearly Western origin. The aforementioned crossover between two major civilizing trends, one Chinese and the other Spanish, is what we can appreciate in the visual composition of this magnificent Calvary, whose iconography underwent considerable artistic development in Latin America from the second half of the 17th century onwards, at which point, and as a major focus of influence, its acceptance in the Philippines was promoted.

The crucifix of ebonized wood presiding over this group of figures offers up an image of Christ, dead and attached to the cross by three nails. The contours of his body are expertly aligned with the demands of the curvature of the ivory tusk from which a highly-skilled hand managed to draw out the image of the Son of God. Christ’s lifeless face, falling down onto his right shoulder, provides an extraordinary exemplification of that balance of artistic influences, with it being possible to discern clearly in his physical features Oriental characteristics, such as the curving of the corner of the eye, and lengthening and stylizing, with iconographic devices of a Western origin, such as the forked beard or the way Christ’s hair is depicted, falling down equally on both sides of his face. Of particular note is the combination between the intended sense of beauty given over to the central figure in the scene, serene and rejecting the dramatism of the ruling model, developing a polychromy with marked Baroque overtones that turns us into the distraught witnesses of the Messiah’s affliction. The absence of sculptural detail regarding Christ’s sex tells us there must originally have been a loincloth made of some fabric which, due to its natural lack of durability, has not survived to the present day.

Accompanying the scene we find the Virgin, St. John and Mary Magdalene. The latter, as recounted in the Gospels, appears kneeling at the foot of the cross, flanked by the upright, and also ivory, bodies of the other two. Displaying great skill in carving these three sculptures, the deft rendering of the Oriental features of their faces by no means robs the spectator of the intensity of gazes riven with pain. The three figures are dressed in accordance with the demands of the day, in robes and cloaks. The Virgin also wears a veil. Equally worth mentioning is the virtuoso manner in which the artist sculpted the hands of these three figures, with an enormous degree of stylization and adhering to the exigencies of dramatic movement.

It is easier to contextualize the work’s execution if we consider the polychromy, limited in earlier pieces to facial features and the edges of clothing. As such, we observe how an elegant copper-gold tone, arranged with painstaking technique, has been applied to the decorative borders of the fabrics, while the visible surfaces of the main garments are adorned with elegant three-leafed flowers. The work we are studying here shares its sparing polychromy and excellent skill depicting folds, hands and facial features with the Calvary preserved at the Seminario Mayor Agustiniano in Valladolid, rated by Margarita Estella as one of the most important known and preserved examples of its type, and this is an assessment we should also now apply to this previously-unknown work which, at last, both scholars and art lovers may enjoy.