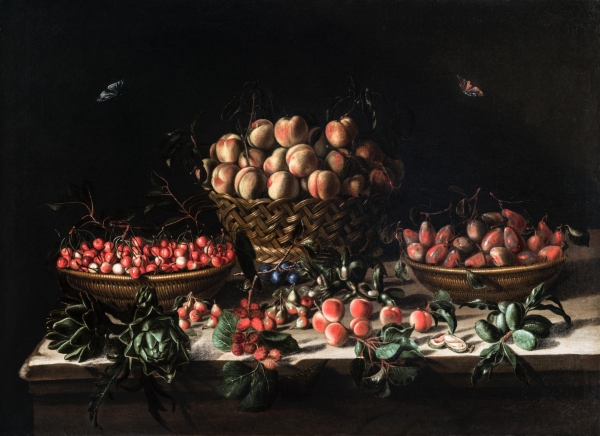 These two paintings, executed as a pair and kindly submitted to my attention by Davide Dotti, represent true masterpieces by Agostino Verrocchi, one of the greatest masters of the still life genre in Rome in the first half of the 17th century. Recurrent leitmotifs across Verrocchi's production can be recognised here, such as the symmetrical arrangement of the baskets, the fluttering butterflies (vanitas symbols), and the disorderly placement of groups of fruits and vegetables on the marble ledge. The warm and vibrant colours of the naturalia are of the highest quality. The echo of Caravaggio is explicit, as can be noted in the direct quotation of the basket in Basket of peaches, plums, cherries, almonds, hazelnuts, pears, apricots and artichokes on a stone ledge, which directly derives from the one realized by Merisi in the Biblioteca Ambrosiana, Milan, and recalls Boy with a Basket of Fruit in the Galleria Borghese. Verrocchi certainly had the chance to see and admire the latter in person, and reproduced such a basket in various paintings such as the still life in the De Carlo collection.

The two paintings are stylistically similar to those in several private collections. Given the artist’s particularly intense and long period of production, they were commonly found in contemporary collections and were often executed as a pair and placed over doors or as a triptych (cf. the different geometrical inclination of the stone ledges: one ends where the other follows, and a third one could in fact be added to close the corner on the right). They had decorative purposes as unique, grandiose canvases, but also provided an example of an impressive laid table which could be hung in the dining room of a noble house.

A peculiar characteristic of the Verrochi family’s studio, active in Rome for more than fifty years having been led by various family members, was the use of models that were evidently favoured by the classical rhetoric of the Baroque. The use of similar figurative components (synonyms) was employed in an almost mechanical way (anaphoric objects). These served to satisfy market demand, but were also part of a precise figurative language. The repetition (repetitio) and exploitation of these symbols were the main tool the studio used to create the most elegant and expressive variations (variatio) of similar compositions.

One can then add other components and rhetorical figures, such as the metaphorical allusion (cf. the symbolic references to life and its passing) or the hypotyposis, hence the depiction of fruit in a lively, palpable and tangible fashion. The language employed by the artist might appear difficult to decipher today, however, at the time that these wonderful paintings were conceived and produced, it would have been immediately understood by the viewer.

Basket of grapes, apples, figs, pomegranates and a pumpkin on a stone ledge