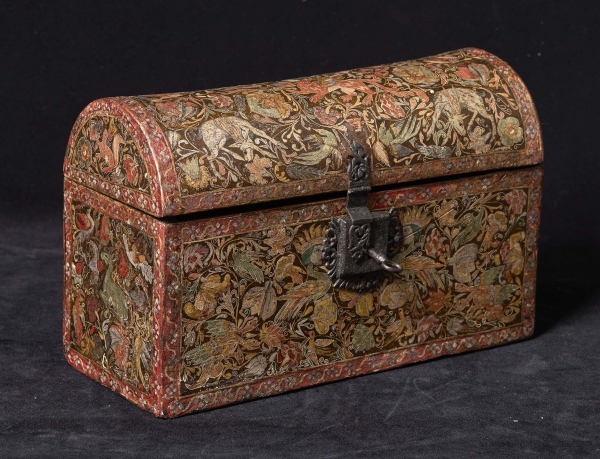 A chest with a rectangular body and semi-cylindrical lid. The structure is made of wood and the design is based on European models. The entire outer surface features profuse decoration in a horror vacui style typical of the European Baroque. It has been executed using a rich palette of light colours where layers of mopa mopa resin alternate with gold and silver leaf, lending the surface a beautiful iridescent colouring that gives off a radiant, golden luminescence. The design is replete with flora covering the entire surface other than where fauna dominates the scenes portraying birds, mammals and other hybrid and fantastical figures.

On the front of the chest we can observe a pair of harpies opposite each other with stylized avian bodies and female faces topped by ostentatious crowns of feathers. The figures dominating the scene are surrounded by profuse floral decorations, some drawing inspiration from Oriental lacquerware, such as peonies and carnations, alongside other native flowers. Delicately-executed birds sip from the flowers while joyful butterflies of varying species flutter in amongst them. The two lower corners feature two fantastical three-headed birds.

In the middle of the back we observe a beautiful white-haired unicorn gazing happily at one of the two extraordinary birds located on either side of it. The artist probably intended to depict dodos, a bird native to Mauritius that became extinct thanks to indiscriminate hunting in around 1662, the year in which the last one was sighted. The lower corners feature two animals that look like Andean tapirs, which would appear to be sipping from the stamens of large flowers. The scene is completed by varying birds with colourful plumage, flowers and butterflies, creating a composition of unparalleled beauty.

The middle of each of the sides features a deer cheerfully at rest, surrounded by birds of exotic plumage that resemble birds of paradise with splendid and imaginative tails, butterflies and varying flowers such as carnations, pomegranate flowers, peonies and bellflowers. On the sides of the lid, squirrels are reveling in the beautiful vegetation.

The lid, which is convex, has a winged sphynx in the middle of it, boasting attractively-coloured plumage and a face with indigenous features, crowned by a feathered headdress. Above this regal figure we observe a splendid, red-plumed macaw joyfully pecking at an enormous pomegranate. In the two front corners there are a couple of magnificent stags with huge antlers, smelling the delicious fragrance that appears to be emanating from the beautiful flowers at their feet. In the opposing central section, two hyenas, facing each other, have blood dripping from their mouths, clearly resting after a fruitful hunt, while a pair of enormous birds of prey are flying with recently-captured birds in their beaks. The scene is completed with a wide range of tropical rain forest vegetation as seen in the rest of the chest and featuring the same compositional design.

Each section of the chest is framed by a decorative border made up of geometric, rhomboid and curved motifs that attempt to imitate (through the varying tones of the coats of mopa mopa resin) the nacreous reflections of Namban lacquerware with mother-of-pearl inlay.

The chest mounts are made of iron and the keyhole has a plain front with worked edges making it look like a cartouche. Both the latch, with goes into the lock, and the two hinges, present the same decorative design, with scrolled openwork.

All of these early 17th century designs depicting hunting animals, and real or mythological creatures, were based on 16th century European sources such as bestiaries, engraving, drawings and illuminated manuscripts, which were an inexhaustible source of inspiration for Andean artists.