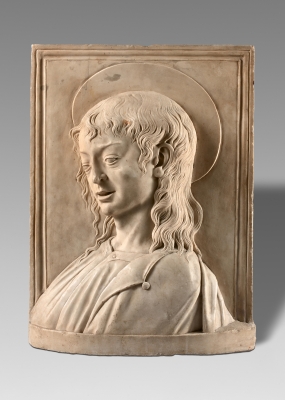 A new addition to Gregorio di Lorenzo’s oeuvre, the present bas-relief provides a significant contribution to our knowledge about the work of this Italian sculptor of the Quattrocento. Having been unknown to scholars for a long period, Gregorio was only rediscovered recently, following much research by various art historians from the end of the 19th century onwards. Previously, he remained hidden behind an anonymous name used primarily out of convenience: ‘Master of the Marble Madonnas’. Coined in 1886 by Wilhem von Bode, this name was applied to a corpus of works close to those of Mino da Fiesole (1429 – 1484) and Antonio Rossellino (1427 – c. 1479). Despite his unidentified status, the ‘Master of the Marble Madonnas’ aroused the interest of several scholars including Ulrich Middeldorf and John Pope-Hennessy. The mystery was finally solved in 2001 by Alfredo Bellandi, who managed to connect the name with Gregorio di Lorenzo.

Having trained in the workshop of Desiderio da Settignano (c. 1430 – 1464), di Lorenzo mostly produced bas-reliefs on Marian themes as well as busts of the Ecce Homo. He opened his own workshop on the Piazza di San Giovanni in Florence in 1461, and enjoyed noteworthy success. Gregorio received several prestigious commissions, including one for a basin for the sacristy of Badia Fiesolana. His artistic activity in the capital of the Florentine Republic is again confirmed by various archival sources dated between 1455 and 1497. Described as an “itinerant sculptor” by Alfredo Bellandi, Gregorio worked for the courts of Naples and Ferrara for which he created two series of the Twelve Caesars. He also made sculptures at Visegrád and Buda for the Hungarian court of Mattia Corvino, where he lived from 1475 to 1490. In 1502, Gregorio was in Forlì, where he worked with Giovanni Ricci and Tommaso Fiamberti on the funerary monument of Luffo Numai in the church of Santa Maria dei Servi. He probably died there around 1504.

Alfredo Bellandi has suggested dating our sculpture to the years 1460 – 1470. He rightly emphasizes that the almost “metallic” handling of the marble, the highly specific form of the eyes, as well as the receding chin of our work all appear in Gregorio di Lorenzo’s Virgin and Child in the Galleria Nazionale delle Marche in Urbino, the execution of which is dated to the 1460s. He has also connected our bas-relief to other sculptures such as the Ecce Homo of the Staatliche Museen, Berlin, and a diptych in the same museum that depicts the Mater Dolorosa and an Ecce Homo respectively. The attribution of our work to Gregorio di Lorenzo is based on the very characteristic form of the eyes of some of his models, that can be recognized by a half-closed eye, clearly marked cheekbones, and lower eyelids. These specific elements, particular to his style, can be found in the Christ Crowned with Thorns in the Szépmuvészeti Múzeum, Budapest, and also in a relief of the same subject now at the Musée Jacquemart-André in Paris, the dimensions of which are similar to those of our work. Additionally, the ear, or more specifically the tragus with its marked relief, are typical of the manner in which Gregorio sculpted this part of the face. The most eloquent comparison proposed by Alfredo Bellandi is certainly the one with the Christ Crowned with Thorns from the renowned collection of Alphonse Kann. Further to the striking similarities between the two sculptures in terms of clothing and pose, this work evidences the highly comparable way in which the artist has sculpted the muscle mass and the bones to make the protruding parts of the face stand out almost artificially.

Our relief is an important re-discovery within Gregorio’s corpus since it is currently the only known example of a profile bust depicting an apostle. Alfredo Bellandi has suggested identifying it more precisely as Saint John owing to the youth of the model. Gregorio di Lorenzo was especially well known for reliefs depicting Roman Emperors and Christ Crowned with Thorns; our sculpture suggests that the artist also specialized in producing effigies of apostles. Like other artists, he tackled this iconography towards the end of his career: he created a series of six apostle heads with Tommaso Fiamberti and Giovanni Ricci at Pievequinta, near Forlì.

Following Ulrich Middeldorf, Alfredo Bellandi has emphasized Gregorio di Lorenzo’s interest in Flemish painting, comparing our bas-relief and an entire portion of his production with certain paintings by Albrecht Bouts (c. 1451 – 1549) and Hans Memling (active 1465 – 1494), whose work di Lorenzo essentially translated into sculpture. The tight framing to mid-bust level and the expressive nature of the models clearly demonstrate a connection or common inspiration. Similarly, Bellandi has noted that the style and technique of our work show the influence of Desiderio da Settignano. He has compared the open mouth, that allows some teeth to be visible, to that of the Tondo Arconati Visconti. He has also found that the virtuoso manner with which the hair has been sculpted in our relief is similar to that in examples by Desiderio. He has endowed his model with stylized and disorganized hair that gives rhythm to the composition and produces a visual effect that is similar to Verrocchio’s depiction of hair.

In the wake of Donatello (1386 – 1466) and Desiderio da Settignano’s experiments, Gregorio di Lorenzo managed to distinguish himself by turning away from the joyful, delicate style of his master in favour of more biting and exacerbated expressions, as exemplified beautifully by our sculpture. A sign of his unique audacity and dexterity, this work therefore confirms the eminent position of di Lorenzo in the effervescent melting pot that was the artistic milieu of Italy during the Quattrocento, in spite of the fact that his personality was only recently re-discovered.