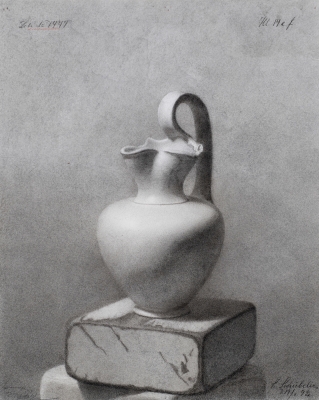 Imbued with the quiet simplicity and sense of timelessness typical of Danish late 19th-century art, and most associated with Wilhelm Hammershøi, Heinrich Scübeler’s study of the effects of light and shade on a pitcher dates to the 19th of January 1892, and was drawn in the classrooms of the Royal Danish Academy of Fine Arts in Copenhagen.

These charcoal studies of light effects on everyday objects and plaster casts after antique sculpture were a mainstay of the academic training received at the academy. Schübeler’s pitcher, sitting on a solid block of wood, itself on a plinth, has been beautifully rendered, with the young artist demonstrating his mastery of volume and texture. Indeed, the drawing has been approved by Emmery Rondahl, a professor at the academy, who signed his imprimatur at the lower left. He himself executed these types of studies whilst a student at the academy a couple of decades before, as did Hammershøi in the early 1880s.

Entirely forgotten today, and leaving scant biographical information, Schübeler was principally active as a painter of interiors, undertaking some of the major decorative projects of his time, including work at the Glypotek, Christiansborg Palace and the Kristussalen at the Thorvaldsen Museum. Schübeler was also an accomplished easel painter, focussing primarily on Danish and Italian landscapes and seascapes.