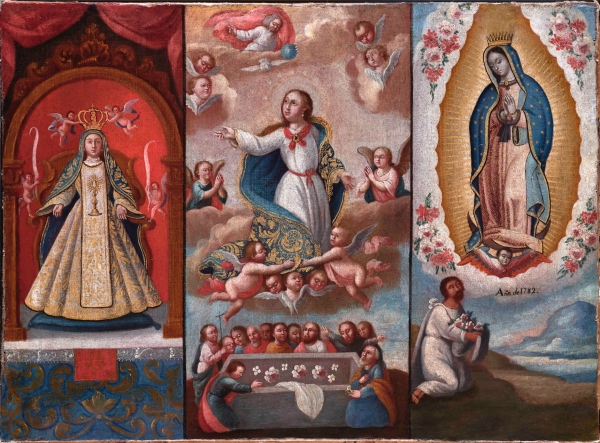 Gabriel José de Ovalle was a “passionate popular painter” to whom the Historiography of Viceroyalty Art has not devoted the depth of study he deserves. His, as was also the case for so many of his contemporaries, was an example of a painter immersed in an artistic environment where practically all that was asked of him was a correct iconographic approach, above and beyond aesthetic verisimilitude or technical prowess. The function of art in the context of the Council of Trent resided in transmitting the Counter-Reformation message, highlighting art’s didactic capacities and largely dismissing the painter’s imagination and creative capabilities.

It is against this utilitarian backdrop, in 1782, that the unidentified artist, follower of Gabriel Ovalle have painted this curious canvas, Advocations of the Virgin, a visual narrative that sets itself up as a perfect manual of Marian iconography where, from left to right, we observe depictions of the following Marian titles: The Coronation of the Virgin, Assumption of Mary and Our Lady of Guadalupe.

Firstly, and occupying the left-hand third of the canvas, we see the image of the Coronation of the Virgin Mary, probably the most significant epiphany of the Mother of the Saviour as the Queen of Heaven. In accordance with the patristic and theological sources narrating this Marian privilege, the Virgin is depicted throned and crowned, surrounded by four angels, two on each side. The two occupying the upper part of the image are placing the crown on the virginal head, while the other two, arranged lower down, and resting their hands on the seat of honour, are holding a cartouche. The painted image of the Virgin appears arranged inside a niche which is in line with the simulated sculptural appearance of the work. As such, the Mother of God is wearing an elegant white robe, secured at the waist and rich in decorative plant motifs in gold leaf embroidery in the same fashion as the scapular falling down from her neck and on which we see the image of a golden monstrance. On her head, and down over both shoulders and beyond, is a blue cape, equally rich in gold decoration. The back of the niche is a deep, striking red colour, a tone we often find in Ovalle’s palette. Also red, though not as deep, is the drape hanging in the upper part of the composition, and which opens symmetrically on both sides of the image.

Secondly, and occupying the central part of the canvas, we see the image of the Assumption of the Virgin Mary, the exact moment at which, following her death, a choir of angels accompanies her body to heaven, under the restful eyes of the apostles who are watching over her tomb. In heaven, dressed in a white robe, undulating red cape and with the orb in his left hand, God the Father is waiting for her, with a white beard, accompanied by the Holy Spirit in the form of a dove. The Virgin, in the middle of the composition, is raised up on a host of clouds and cherubs. She wears a white robe, secured to her body with a red belt that matches a band of fabric adorning her neck. On top of that, the blue cape, richly decorated with gold leaf plant motifs. Towards the bottom of the image, the twelve apostles, presenting the bold colours that characterise the Mexican painter’s palette.

Finally, on the right-hand side of the composition, we see the image of the apparition of Our Lady of Guadalupe to the Indian Juan Diego, an iconographic subject that was common in artists such as the one we are addressing here, and who made such efforts to ennoble the value of his homeland. As was so often the case with the Master Ovalle, here we see how the image appears before a broad landscape with a background made up of light tones. In the foreground, kneeling towards the left of the composition, we observe the witness to the miracle, the Indian Juan Diego. He is wearing a white robe with a basket of flowers in his hands, which he would appear to be offering to the Mother of God. Above him, and floating in a host of white clouds, Our Lady of Guadalupe. Depicted in accordance with the original tilmatli, she is wearing a red robe, starred blue cape and crown. Her features, though European, are drawn on a greyish, mestizo skin. At her feet, a cherub is picking up the excess fabric, revealing the crescent moon above which the virginal figure is elevated. Finally, running around the entire outline of her image, we see a golden glow that provides an intimation of the sun.

In conclusion, this unusual work, which bears witness to an artistic technique in which content took precedence over form, constitutes a clear example of the evangelising role painting played in the Viceroyalty of New Spain.