Academic Study of a Man Gripping a Stone Plinth 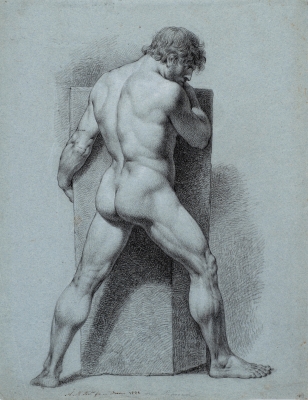 This imposing academic study of a powerfully built model wrapping his arm around a stone plinth was drawn by the Portuguese artist António Manuel da Fonseca in 1833 in Rome. At this time the city was still considered the most important training ground for history painters and a magnet for artists from all over Europe. One of Portugal’s leading artistic talents, Fonseca was able to travel to Italy in 1826 thanks to the support of his patron the Count de Quintela and of King Pedro IV. In the Eternal City, the Portuguese artist trained under Andrea and Pozzi and Vincenzo Cammucini. The latter, considered to be the leading Italian neoclassical painter of his day was also a prolific and talented draughtsman. The present sheet was possibly executed under his supervision.

With the model’s formidably broad shoulders and oaken legs, Fonseca may well have been thinking of the Belvedere torso or the Farnese Hercules, two of Rome’s most celebrated ancient sculptures. The musculature is not quite so exaggerated however as with these two marble colossi, and Fonseca demonstrates an accomplished understanding of anatomy, very skilfully rendering the ligature and forms of the left elbow and right knee, for example. Subtle but elegant is the way that the model’s left-hand wraps around the plinth, whose roughly hewn surface is indicated by hatched lines. It’s a shame that there are so few known drawings by Fonseca, as he was clearly a deft draughtsman.

Fonseca spent seven years on and off in Rome, where much of his time was spent copying the works of the Italian greats, and above all Raphael. His Italian sojourn significantly elevated Fonseca’s status amongst his compatriots, so much so that, upon his permanent return in 1834, the artist was soon appointed to the professorship of history painting at the newly established Academy of Fine Art in Lisbon. For the remainder of his long career, he exhibited his history paintings and portraits in Lisbon and Porto, gaining acclaim and several of Portugal’s highest honours. Fonseca did not focus solely on large-scale paintings however, turning his hand to other artistic activities, such lithography and costume design, as well as set designs for a Meyerbeer opera. Interestingly, he also had success as a sculptor later in his career, an interest which this sheet, with its superbly rendered volumes, perhaps in some ways prefigures.