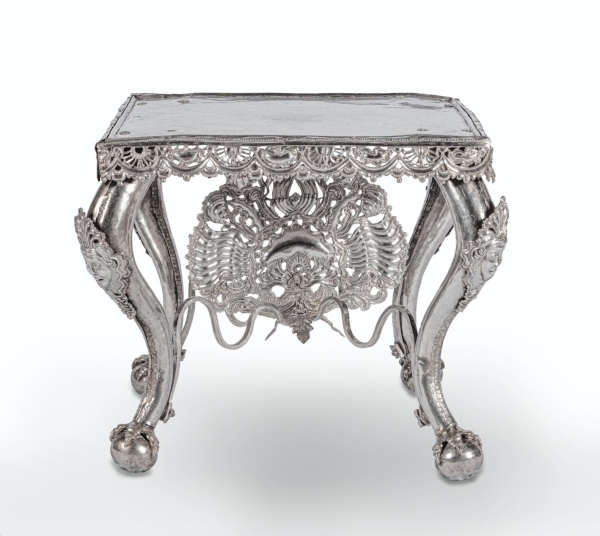 This extraordinary estrado table is probably the only remaining example of its type to have survived to the present day, and it offers a glimpse of a Peruvian Viceroyalty inhabited by a social elite of exquisite tastes and incomparable wealth. The word “estrado” comes from the Latin “estratum, which means elevated platform, and it originally implied a certain posture, that of squatting down with your legs crossed, or leaning back. At one time, the Spanish adopted this custom, by which ladies sat on huge cushions in “Moorish” fashion, while busy sewing, chatting, reading or praying. This custom was subsequently exported to the New World by the conquistadors. An estrado, or estrado de damas, referred to a room furnished in Oriental style, which featured a carpeted rectangular platform on which little pieces of furniture were arranged, such as chairs, tables, trunks, boxes and cushions. This form of repose was common throughout the Orient, and Spanish books and chronicles from the period relate the chores and day-to-day activities of the ladies in these curious little rooms.

During the Spanish Golden Age and up until the 19th century, ladies could relax in the privacy of these spaces given over exclusively to them. Both Lope de Vega (1562-1635) and Miguel de Cervantes (1547-1616) mention these rooms on numerous occasions in their famous literary works. In the Museo Casa Natal de Cervantes, an original estrado is preserved to this day. One can also visit the estrado de damas in the Castillo de los Mendoza in Manzanares el Real.

Because the varying furnishings used in these rooms had to be small, in the Peruvian Viceroyalty they were given the soubriquet of “mueble ratones”, or “mouse furniture”. In Latin America, chairs were arranged on the platform around a table or brazier. Due to their size and decorative function, many such wooden pieces have survived, built on a miniature scale and decorated in exactly the same fashion as their full-size counterparts.

The unusual silver estrado table we have before us here has markedly curved cabriole legs, in the French fashion, and one is drawn to the Rococo style of its profuse ornamentation. The naturalist decoration presents figurative elements of a Western variety, which are combined with an indigenous New World stamp, thereby obtaining a marvelous mestizo style. This syncretism may be clearly identified in the four mascaroons on the bends of the legs, where the figures are depicted wearing feather headdresses, a cultural crossover characteristic of works from Upper Peru, setting a unique style. The tabletop is flat, with a plain surface lacking in any decoration, and a skirt on all four sides in richly ornamental openwork. Underneath the tabletop there is a large ornamental feature with leaves, scrolls and volutes using the same technique as the aforementioned openwork. The legs, which have curves and counter-curves in an “S” shape, rest on claws that grip balls.

It is extremely hard to believe that this magnificent piece should have survived to the present day, given even when it was made it must have been commissioned by some wealthy gentleman with a luxurious residence. The high value of silver itself proved the downfall of many large objects or pieces of furniture executed in the noble metal, with their owners succumbing to the temptation, over the years, to melt them down to reap the immediate monetary gain.