A Spotted Hound and a Hunter with a Gun with a dead Boar, a Deer, Hares and Birds by a Basket at the Edge of a Wood, a Staghunt and a View of the Bay of Naples and Mount Vesuvius beyond 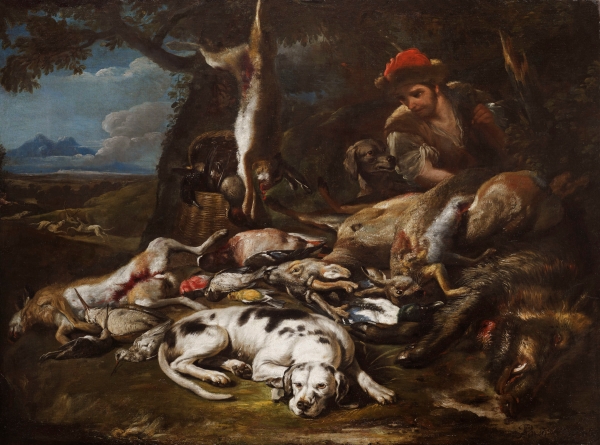 According to his biographer Bernardo de Dominici, De Caro was a pupil of Andrea Belvedere.[i] De Caro’s only dated work, of 1715, is one of a set of four still-lifes of vases of flowers in the collection of the Banco di Napoli (two exhibited at Villa Pignatelli, two on loan to the Pinacoteca di Bari); these are very much in the manner of Belvedere and give strong support to the identification of him as De Caro’s master. De Caro subsequently established himself as a specialist in hunting still-lifes, which were influenced by – and borrowed motifs from – Flemish painters such as Frans Snyders, Jan Fyt and David de Koninck. These were collected enthusiastically by the Neapolitan aristocracy and, De Dominici tells us, by the Bourbon King Charles III after his accession in 1734. De Caro’s popularity waned in the latter part of his career, although his style was imitated in the few known works by his son Giuseppe De Caro (born c. 1722). Even less is known of his other son Lorenzo (not to be confused with the figure painter of the same name).

Like many of the larger and more impressive Neapolitan still-lifes of the period, this painting is a work of collaboration. As Professor Riccardo Lattuada has confirmed, the figure is the work of Paolo de Matteis (Piano del Cilento, Salerno 1662 – 1728 Naples). De Matteis received his first artistic training from Luca Giordano. After moving to Rome by 1683, however, he was also influenced by the classicism of Carlo Maratta, and became an important figure in the development of Neapolitan painting from Baroque drama towards the softer, more Rococo style of the eighteenth century. He was ‘discovered’ by the Marqués del Carpio, Viceroy of Naples 1682-7, who found him copying the altarpieces in Saint Peter’s, and subsequently had a highly successful career, his international fame winning him such patrons as the Comte d’Estrées, for whom he worked in Paris 1702-5, Pierre Crozat, the Cardinal de Polignac, the 3rd Earl of Shaftesbury, Admiral Byng and Prince Eugene of Savoy. He also worked for the Emperor Joseph I, for whom he executed before 1711 an altarpiece for the chapel of the Hofburg in Vienna, and for another Viceroy of Naples, Count Philipp Lorenz Daun (1669-1741), for whom he painted a Triumph of Hercules to decorate a ceiling in his palace on the Freyung in Vienna (1714-19) and an Allegory of the Victory of the Emperor Charles VI over the Turks.

A pair of paintings by De Caro with figures by De Matteis, both similarly signed by De Caro alone, in a private collection, were published by Riccardo Lattuada in the catalogue of the exhibition Dipinti della collezione D’Errico di Palazzo San Gervasio a Matera at Palazzo Lanfranchi.[ii] De Matteis owned two pairs of small still-lifes of game by De Caro, which are recorded in the inventory of the contents of his home in Naples taken immediately after his death.

A very similar hound, but cream with no markings, is shown in a painting by De Caro sold at Sotheby’s, London, 20 April 1994, lot 71. It is also shown alone, with different markings, in a canvas attributed to De Caro currently with Rafael Valls Ltd.[iii]