A marine landscape with scorpionfish, bream, garfish, a cuttlefish, crustaceans, oysters and corals on a rock 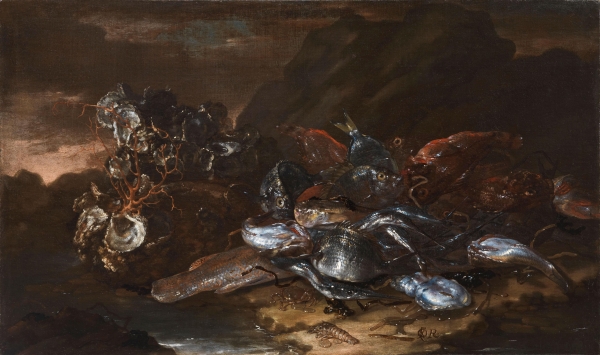 The painting will be included by Dr. V. Di Fratta in her upcoming monograph on Giuseppe Recco.

An abundance of different varieties of fish — surely symbolising the generosity of nature — swirl above the rocky sea bed, caressed by water. A crepuscular light shines in from the background to emphasise the rough and slippery skin of these creatures. As a result of these rays, the sea drops glimmer on the fishes’ wet bodies, and the pearlescent cavity of the oysters are lit up.

This accomplished painting, signed with the monogram EQS.R (Eques Reccus), was executed by Giuseppe Recco at the pinnacle of his artistic maturity towards the end of his career: it can probably be dated to the 1690s. The painting conserved at the Uffizi and likewise signed ‘EQS.R’[i] is from the same period, and represents the last known work by the artist. Our painting and the Uffizi picture both depict their subject in an incredibly realistic manner, while maintaining an intriguing and illusive atmosphere. An even closer point of comparison to our work is Morays, red mullets, squids and other fish by the sea, next to a rock with oysters and corals, in a sunset landscape from a private collection,[ii] which too is signed ‘EQS.R’ and owing to the close analogies in terms of composition, could almost be considered a pendant.

Another comparable work is Seascape with sea bass, red mullets, breams and other fish, squids, sea shells and corals on a rock from a private collection and which appeared on the English market some time ago, similarly signed ‘EQS. Recco’. The beautiful pair Fish and shells in a landscape and Fish, crabs and lobsters conserved at the Musée des Beaux/Arts et d’Archoeogie di Besançon[iii] should also be mentioned here, both signed with the monogram ‘EQS.R.’. In these paintings, which also belong to Recco’s mature period, the natural setting appears indefinite therefore contrasting with the depiction of the sea creatures, which feel very physical and almost tangible.

The present painting is dateable to the artist’s mature period not only due to its aforementioned features in terms of both compositional structure and style, but also owing to the evident influence of Luca Giordano (1634 – 1705), with whom Recco had begun to collaborate with more consistently from the 1680s. If we analyse the later works he produced, we can indeed notice an increasing ‘Giordanization’ of his technique, especially when faded backgrounds are employed to enhance a sense of distance from the viewer, or when the chromatic variations in the foreground are used to suggest movement and the plasticity of the colours give vital consistency to the depicted objects.

The virtue of the present painting becomes clear upon first inspection. A vivid example of Neapolitan art and of the ‘intuition du monde aquatique’ theorised by Charles Sterling, it is surely the product of the daily observation of nature in the prosperous Gulf of Naples. This was one of the main traits characteristic of Recco’s craftsmanship.

In the 17th century, the genre of still lifes that included fish became very popular in Naples. The predisposition for this theme is explained by the aforementioned abundance of fish on the Gulf, the genetic memory of the xenia of the Roman period, the scientific tradition of producing erudite illustrations of the natural world and, finally, by the quintessentially Neapolitan habit of gaining direct inspiration from life, as is evident in the production of naturalist painters.

It is thought that various Visstillevens by Northern Masters circulated in Naples during this period. The composition and execution of those which included fish varied significantly. Earlier examples were closer to scientific reproductions, such as the meticulous paintings of Clara Peeters and Jan van Kassel. Later, the Visstillevens grew in scale – take, for example, the exuberant compositions of fish on market stalls, in kitchen storerooms or on rich tables like the ones realised by Dutch painters Abraham van Neijeren and Pieter de Putter, or the Flemish Frans Snyders and Jan Fit, and the airy sea landscapes by van Kassel, Pieter Boel and Jacob van de Kerckhove. The difference however is that, while in the Northern paintings the fish are depicted in minute detail and triumph at the centre of the composition to convey symbolic meaning, in Neapolitan still lifes the fish are still alive and dart, gasp and intertwine in order to represent the full breadth of life.

The evolution of the genre reached its climax with Giuseppe Recco. Regarded as the best interpreter of the theme, he always created different and surprising compositional arrangements of the same subject and achieved exceptional results in his attempts to imitate creatures of the sea. He was a true master of portraying wet surfaces, constantly experimenting with iridescent reflections and faithfully depicting sea-eroded rocks in a number of marine settings.