A cockerel, a partridge, powder horns, a kingfisher and song-birds hanging in a niche, with a cobweb, a snail and insects 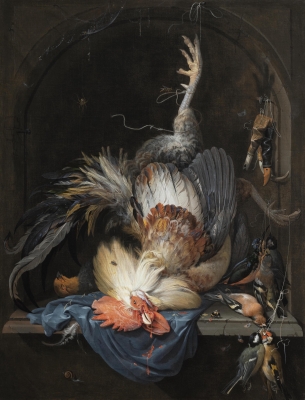 The present painting is a resplendent example of Abraham Mignon’s hunting still lifes. The majestic cockerel is surrounded by a multitude of other types of bird, including a partridge, powder horns, a kingfisher and songbirds, whose jewel-like colours provide embellishment to their darker stone surroundings. The same can be said of the vivid blue sash, which contrasts dramatically with the orange tones of the cockerel’s headpiece under which it lies.

Mignon was not just a master of colour, but was also shrewd when it came to compositional arrangement: here the cockerel is suspended by only one leg from cords pinned to the top of the niche, allowing the bird to hang slightly off centre and for all of its feathers (including the stiff tail plumes) to unfold into the space.[i] The second foot – which can be observed in the right margin, curling over the precipice of the niche to create a greater sense of proximity to the viewer – is used to suspend two clusters of songbirds. Hunting accessories, such as the recurring coral amulet, fill the space on the other side of this foot, thus restoring the composition’s balance. Insects are also scattered throughout the scene: a spider dangling from its web, a snail, a bumblebee, and flies on the cadaver, which provide the most obvious allusion to decay and to the transience of life.[ii]