A capriccio of a villa surrounded by a moat, with a classical statue of a goddess to the left 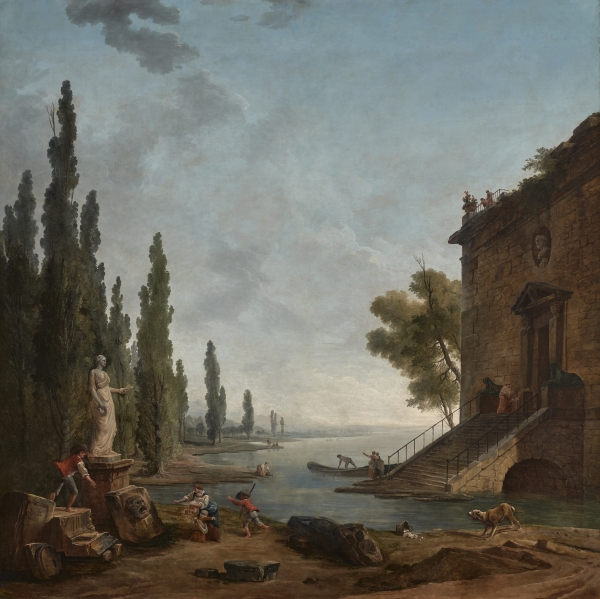 [i] Given that Madame F. Vernez and Charles Paul Henri Wallon each owned one of the paintings that make up the present pair and decided to consign them in the same sale, it seems likely that they were related and owned one picture each.

The present pair of rarely-seen paintings are outstanding examples of Hubert Robert’s characteristic oeuvre. Both signed and dated to 1797, these capricci belong to the mature period of the artist’s prolific and celebrated career, as is attested to by their undoubted quality. Incorporating multiple motifs, compositional designs, and creative techniques which Robert employed across some of his best-known works, they are accomplished demonstrations of much for which he is remembered today. Yet Robert’s inclusion of a rare self-portrait towards the lower left of the second canvas distinguishes this pair from the vast majority of his other landscapes, and thus elevates their relative importance.

French by birth, Robert trained in Rome for over a decade from 1754, as was common for many of his contemporaries. This period was enormously formative, imbuing the artist with a lifelong proclivity for classical architecture and especially for the romance of ruins, the latter earning him the sobriquet ‘Robert des Ruines’. Among Robert’s foremost influences was the work of Giovanni Battista Piranesi (1720 – 1778), who was then at the height of his fame and in the process of publishing his collection of etchings of Roman edifices and monuments. Robert’s reputation was established almost immediately upon his return to Paris in 1765. He was appointed a member of the French Royal Academy only a year later in 1766 and exhibited at the Salon from 1767 onwards. Such was his popularity that he was appointed designer of King Louis XVI’s gardens in 1778 and was given lodgings in the Louvre.

Throughout the remainder of his career, into the 1780s and 1790s, Robert maintained a keen interest in painting the ruins which had so fascinated him during his early years in Rome. In addition, he executed numerous views of contemporary architectural subjects and topographically accurate scenes, as exemplified by his series of oil sketches produced for the proposed restructure of the Grand Galerie of the Louvre. It is, however, beyond doubt that Robert’s artistic legacy rests primarily upon the enduring appeal of his capricci: these are the works which allowed him free rein to indulge his most ambitious compositions and in turn to leave his own unique mark on the history of Western Art.

The Colnaghi capricci blend fantasy with observation from life in their depiction of landscapes, the deft combination of which can be found throughout Robert’s corpus. The classical motifs scattered throughout the canvas depicting a villa surrounded by a moat are an example of this weaving of pictorial truth and fiction:[i] although none of the artefacts are obviously identifiable, their stylistic verisimilitude speaks to Robert’s first-hand examination of similar archaeological remains during his Roman period. Such truth-to-life is repeated in the second canvas which features a fountain in the foreground, as the sculpture standing on top of this structure bears a striking resemblance to the Apollo Belvedere. This widely-celebrated statue was evidently favoured by Robert who included it in a number of other works, such as the capriccio sold at Sotheby’s London in July 2011.

In a likewise realistic manner, the hill-town just off centre in the distant background of this canvas – dramatically perched high above the viewer – is reminiscent of Tivoli. Yet in this section of the composition, in a characteristic twist, Robert has painted a settlement whose architecture is more French than Italian. Where he would usually either create an imagined classical settlement or lift actual antique edifices wholesale, here Robert appears to have chosen a recognizably Northern European architectural composite with rounded turrets, sloping slate-grey roofs, and the general feel of a French-Renaissance fortress or château. This painting is therefore an intriguing example of Robert’s idiosyncratic synthesis of two visually distinct architectural traditions – an occurrence which is common to many of his capricci, but which is usually confined only to the combination of classical and contemporary decoration. As such, this canvas is one of the few in Robert’s body of works to explicitly speak to both his French origins and his deep-seated appreciation of the Italianate.

It can be said that Robert himself calls the viewer’s attention to such personal touches by way of his inclusion of a self-portrait to the lower left of the second canvas. The figure sketching the view before him can be interpreted in this way not only owing to his physiognomy, which is comparable to contemporary images of the artist, but also because of the nature of his activity: this man is engaged in precisely the sort of plein air drawing that Robert practiced in order to capture the details of his surroundings during his Italian sojourn.[ii] Although the motif of an artist working outdoors recurs across Robert’s corpus, very few of these figures can be convincingly identified as self-portraits. A notable exception is the Landscape with a Terrace and Cascade in the State Hermitage Museum, Saint Petersburg, which was also painted towards the end of Robert’s life in 1802 and features a probable self-portrait in its lower margin.

[i] A study for this canvas was sold in Paris, Hôtel Drouot, 23 March 1908, lot 39. It was later in the James Speyer collection. Speyer exhibited it at the Metropolitan Museum of Art, New York, in 1935-6: Exhibition of French Painting and Sculpture of the XVIII Century, no. 52, illustrated. This work was then sold in New York, Parke-Bernet, 10-11 April 1942, lot 15.
[ii] M. L. Myers, French Architectural and Ornament Drawings of the Eighteenth Century, exh. cat., Metropolitan Museum of Art, New York 1991, p. 172.

A capriccio featuring ancient ruins, a fountain in the foreground, and a self-portrait of the artist at work